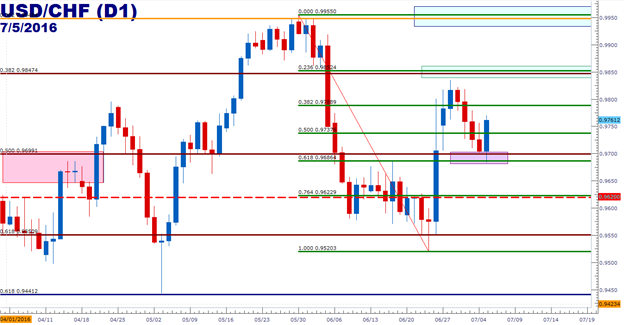 In our last article, we looked at the bullish price action structure forming in USD/CHF after the Brexit referendum in the week prior. On the heels of that referendum, global markets saw intense risk aversion that saw strength filter into safe-haven currencies such as the Japanese Yen, the US Dollar and even the Swiss Franc. This was so profound on the morning after Brexit that the Swiss National Bank intervened in order to quell persistent Franc-strength being seen at the time, particularly against the Euro and British Pound.

But the impact from these actions can be felt in other markets, such as against the US Dollar: With the very real threat of the Swiss National Bank intervening in spot markets in the event of excessive Franc strength, this can be a headwind that makes the prospect of playing short-USD themes against CHF a daunting prospect. And on the USD-strength side of that scenario, this could make for a more attractive way of looking to get long-USD as markets tread carefully around the prospect of being long CHF.

Price action to open this week moved down to the confluent zone of support that we had looked at in our last article, using the zone from .9686-.9699. The level at .9686 is the 61.8% Fibonacci retracement of the most recent major move, taking the May 2016 high to the June 2016 low; while .9699 is the 50% retracement of the May 2015 low to the November 2015 high. This confluent zone of Fibonacci support/resistance is also very near the post-Brexit Friday-close in the pair at .9705, and this only increases the attractiveness of this zone as a potential level of interest.

Moving forward, Swissy will need to take out the prior swing-high at .9836 to further its bullish structure. Should this happen, traders can look for support on the 38.2% retracement of the most recent major move at .9789, or a bit deeper at the 50% retracement of the same move at .9738 (both shown in Green on the below chart). Targets can then be cast to another confluent zone of potential resistance at the .9950 area, as this contains the 38.2% retracement of the ‘secondary move’ in the pair, taking the 2010 high to the 2011 low while also being the May 2016 swing-high in the pair.