In our last article, we looked at the range that had built-in to USD/CHF just ahead of the Brexit referendum. And as we warned, this range was extremely vulnerable as the upcoming vote around the U.K. leaving the European Union had the potential to roil macro-economic themes across global financial markets.

And roil it did: Voters surprised markets by electing to ‘leave’ after a risk-on rally had built-up on the presumption that voters would choose to continue the status quo by voting to stay. As news permeated markets that many districts were showing stronger-than-expected results on the leave side of the campaign, risk aversion began to show across global markets. This brought a major bid to haven assets such as Gold, Treasuries, the Japanese Yen and the US Dollar. Also high on that list of ‘haven assets’ is the Swiss Franc, as we saw the Euro drop by nearly 400 pips over a seven-hour window as the results were making their way into markets.

And then something familiar happened: The Swiss Franc started dropping aggressively, spiking against the Euro by more than 250 pips over the next four hours. It wasn’t until later that we heard that this was the product of the Swiss National Bank intervening in currency markets to stem the rampant Franc strength that was being seen in this ‘flight-to-quality.’ If anything, the surprising part was that the SNB actually admitted this, as they normally ‘no comment’ questions regarding intervention; and this itself should serve as warning for traders that the SNB is watching for excessive Franc strength.

So, this is a pair that traders should be extra cautious with if looking to implement short-USD price action themes; as there may simply be greener pastures to voice that same theme without the threat of the representative Central Bank jumping on the other side of the trade.

However, for traders that do want to look at long-USD continuation strategies, Swissy may be or become an attractive candidate for such a theme. At current, price action appears to be attempting to carve out a ‘higher-low’ on the 61.8% Fibonacci retracement of the most recent major move. But be careful here, as a confluent zone of Fibonacci resistance just ~60 pips away could cap top-end movements in the near-term. More attractive would be a deeper retracement to the 50% Fibonacci level around .9738; or to take matters a bit further, we have another confluent zone in the .9686-.9700 area that could also be an attractive area of resistance. Should support build-in around either of these zones, top-side continuation strategies could become attractive, targeting that same .9850 zone of potential resistance. 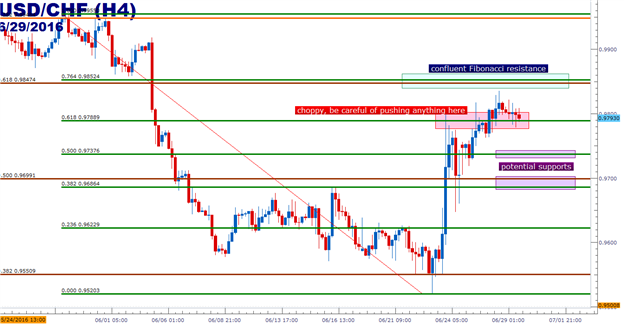