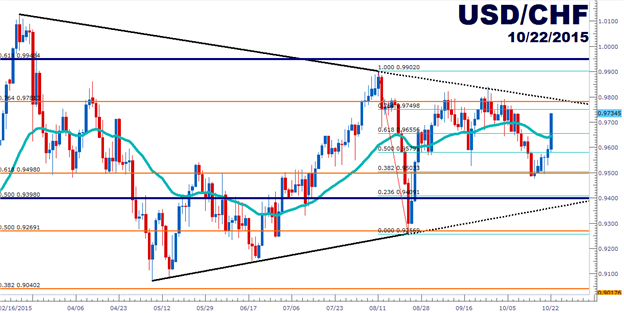 In our last article, we looked at a long position with the basis of confluent Fibonacci support at the .9500 region on USD/CHF. This was a big level, as we had two different longer-term Fibonacci levels within a five-pip range of a major psychological level. At .9503 we have the 38.2% Fib retracement of the most recent major move, and just five pips lower at .9498 we have the 61.8% retracement of the secondary move in the pair, taking the 2015 high and low in USD/CHF. And after that article was printed, we saw USD/CHF pose a brief break below this confluent zone of support, only to catch price action support shortly thereafter and begin moving higher. We’ve now rallied over 250 pips, and USD/CHF is looking considerably more bullish…

But caution should be urged here, as the longer-running symmetrical wedge formation continues in the pair, and confluent resistance is a mere 20-50 pips away, and the projection of the top-side of that symmetrical wedge is approximately ~65 pips away from current market price, and this could cap top-end profit potential for long positions until a more clear longer-term trend can be identified.

The near-term issue is the ramp higher in prices that we’ve seen in the wake of this morning’s European Central Bank meeting, in which Mario Draghi hinted towards an expansion of the economy’s QE program. This leaves the current setup far from any nearby support levels that can be used for stop management. For traders that do want to get long USD/CHF, confirmation of this recent bullish-run could be seen if we break through this confluent resistance and the top-end of this symmetrical wedge. At that point, we might be able to proffer a long-term trend in the pair.

Until then, this market could be more attractive for reversal plays as we inch closer to resistance. At .9750, which is a major psychological level, we also have the 76.4% Fibonacci retracement of the most recent major move; and 30 pips above that at .9780 we have the 76.4% retracement of the secondary move, and the downward-sloping trend-line that makes up the top-side of the wedge is currently projecting to .9795-.9800. Each of these levels could be attractive for selling should near-term resistance show, and this could be evidenced by an elongated wick on the 4-hour or daily charts. This could open the door for short-side targets at .9655 (the 61.8% retracement of the most recent major move), .9580 (the 50% retracement of that same move) .9500 (a major psychological level as well as that confluent zone of support).

Euro May Break Seven-Year Floor vs. US Dollar, Fall Below Parity
Advertisement