The Canadian Dollar is being pulled in opposite directions as the Russia-Ukraine crisis ebbs and flows. And that is likely to remain the case for the foreseeable future, until permanent de-escalation is achieved. When tensions flare, oil prices have rallied, an otherwise positive development for the Loonie only to be offset by the broader risk-off tone that dominates markets.

Today has produced the diametrically opposite scenario. With news that tensions are easing, oil prices have dropped, an otherwise negative development for the Canadian Dollar that has been offset by the broader risk-on tone coursing through markets.

Accordingly, more consolidation is eyed in pairs like CAD/JPY and USD/CAD rates, both of which remain in ranges or triangles that are in no hurry to yield breakout opportunities. 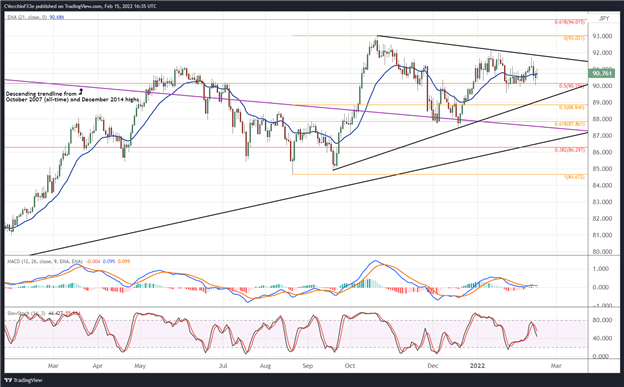 CAD/JPY rates have continued their multi-week sideways grind, holding within the parameters of a symmetrical triangle that has been forming since September 2021. To this end, nothing has changed, “as the preceding move was higher, the ultimate resolution of the symmetrical triangle is eyed for a bullish breakout – consistent with the bigger picture rally above the descending trendline from the November 2007 (all-time high) and December 2014 highs.” Furthermore, “CAD/JPY rates are still in the early stages of finding their footing for another attempt to climb through 92.00, ultimately “on course to return to their 2021 high at 93.02 in the coming weeks.” 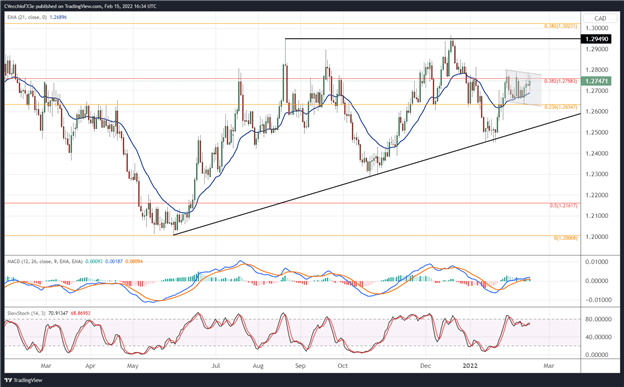 Since late-January, USD/CAD rates have traded between their daily 21-EMA (one-month moving average) and the 38.2% Fibonacci retracement of the 2012 low/2016 high range, approximately a 150-pip range. It thus remains the case that, “consistent with sideways moves, opportunities for a bullish breakout or a bearish breakout exist simultaneously. Should USD/CAD rates trade higher through 1.2800, the measured move calls for a return to the December highs near 1.2950. Conversely, and what is the preferred direction, a breakdown by USD/CAD rates below 1.2650 would target 1.2500, where the rising trendline from the June and October 2021 swing lows appears.” 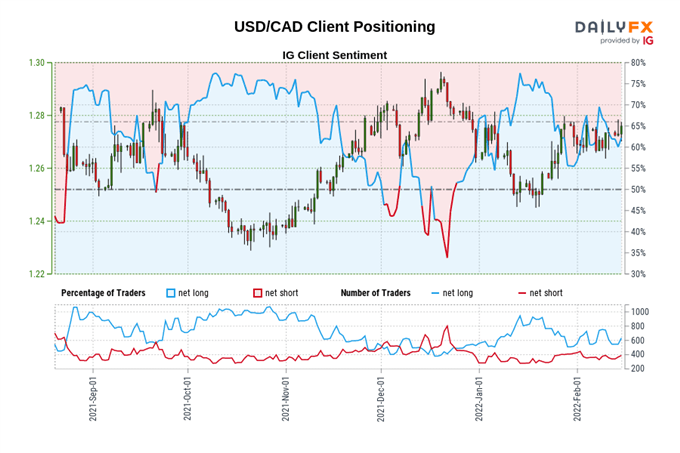