The Canadian Dollar is having a strong start to the week as global equity markets and energy prices continue to press higher. And while our point of view has remained consistent in recent weeks – that “continued gains in energy markets suggest that Canadian Dollar losses should be limited, suggesting that ‘buy the dip’ opportunities are forming in the CAD-crosses” – the end of this week may provide such an opportunity.

Incoming Canadian labor market figures are expected to be quite disappointing, with a contraction in both headline jobs growth as well as a jump in the unemployment rate. Should the January Canada jobs report – one driven by temporary factors such as the surge in COVID-19 omicron variant infections – prove disappointing, it very well may once again setup an opportunity to ‘buy the dip’ in CAD/JPY rates, or conversely, ‘selling the rally’ in USD/CAD rates. 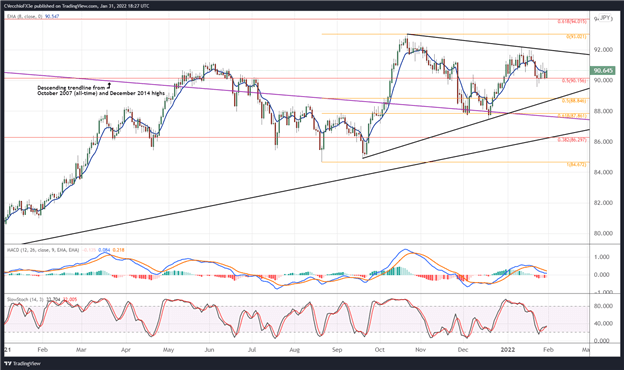 CAD/JPY rates have not made much progress in either direction over the past week, although it should be noted that they continue to trade within the confines of a symmetrical triangle that has been carved out since September 2021. Insofar as the preceding move was higher, the ultimate resolution of the symmetrical triangle is eyed for a bullish breakout – consistent with the bigger picture rally above the descending trendline from the October 2007 (all-time high) and December 2014 highs.

Momentum has started to pick back up, with CAD/JPY rates on the verge of closing above their daily 8-EMA for the first time since January 19. Daily MACD’s descent above its signal line is slowing, while daily Slow Stochastics have continued their climb out of oversold territory. CAD/JPY rates are still in the early stages of finding their footing for another attempt to climb through 92.00, ultimately “on course to return to their 2021 high at 93.02 in the coming weeks.” 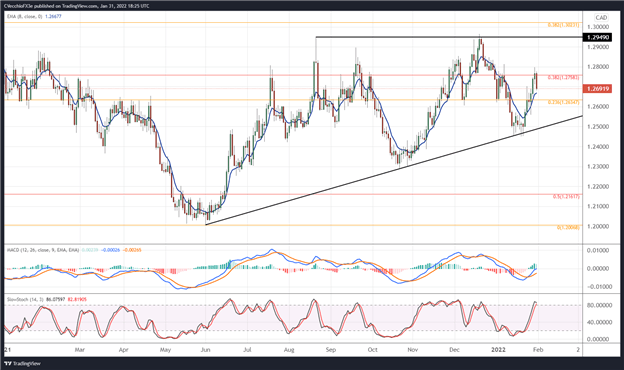 USD/CAD rates have reversed lower after tagging the 38.2% Fibonacci retracement of the 2012 low/2016 high range at 1.2758, suggesting that the rally off of the ascending trendline from the June and October 2021 swing lows has been completed. While the jobs figures at the end of the week may prove to be an obstacle to more meaningful losses in the near-term, there is a reasonable technical basis to suggest that a near-term high as been established against 1.2814, the January swing high which was not reached; a series of lower highs and lower lows is in place over the past month of trading. Ultimately, rallies are still looking to be sold for a return back to the June and October 2021 trendline near 1.2500 by mid-February. 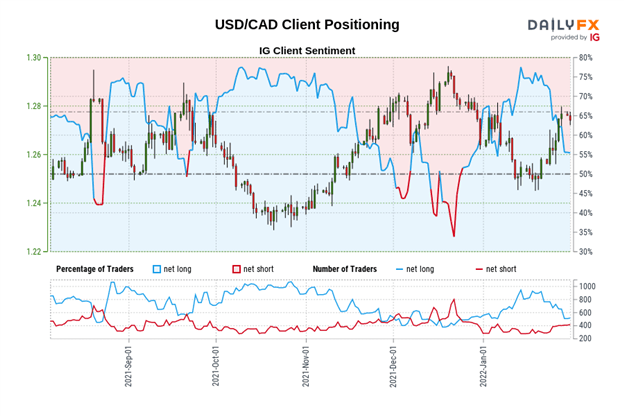