At the start of the month, it was noted that “now that October has arrived, and Canadian federal elections have passed, the Canadian Dollar is able to track more closely energy prices – and the BOC may be given leeway to resume its policy normalization efforts.”

Through the first two weeks of October, the Canadian Dollar has realized its bullish fundamental potential: surging oil prices (energy constitutes 11% of the Canadian economy) and better than expected Canadian economic data (the Citi Economic Surprise Index for Canada is up from +22.3 to +40 over the past month) have helped propel the Loonie higher. The bullish fundamental narrative has been reinforced, and the technical perspective looks supportive as well. 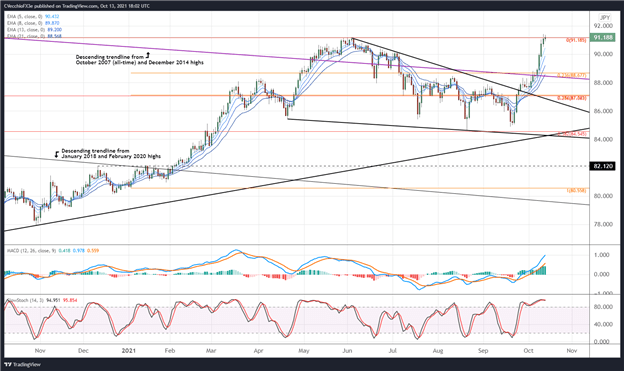 In the prior Canadian Dollar forecast, it was noted that “a bullish falling wedge has formed over the past six months…a run above the descending trendline from the October 2007 (all-time high) and December 2014 highs is in its early stages…a move above the 23.6% Fibonacci retracement of the 2021 low/high range at 88.68 would suggest gains towards the yearly high (91.19) is due this October.”

The measured move in bullish falling wedges calls for a return to the base (starting point) of the pattern, which was achieved earlier this week when CAD/JPY rates surged to a fresh yearly high at 91.41.

CAD/JPY rates are holding above their daily 5-, 8-, 13-, and 21-EMA envelope, which is in bullish sequential order. Daily MACD’s is advancing rapidly above its signal line, while daily Slow Stochastics are holding in overbought territory.

If anything, there could be a brief pause in bullish momentum now that the bullish falling wedge has been completed – but momentum indicators that, directionally, the bias remains higher. 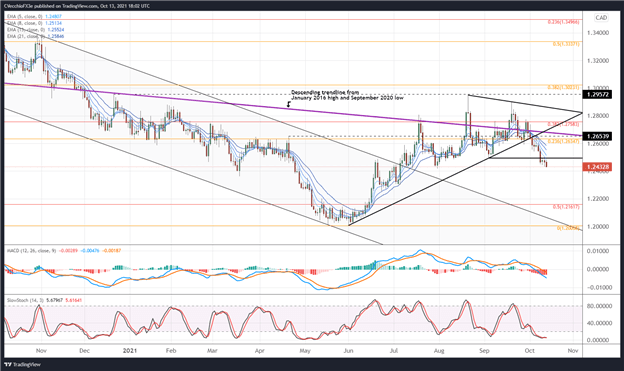 It was previously observed that “USD/CAD rates have been trading sideways for several weeks, but may finally be seeing a directional breakout…in losing the 23.6% Fibonacci retracement of the 2020 high/2021 low range at 1.2635, a more significant selloff may just be getting started.”

Indeed, USD/CAD rates departed the symmetrical triangle to the downside, all while holding below descending trendline from the January 2016 high and September 2020 low. In clearing out the September 2021 low, the uptrend that defined the middle part of this year has reversed.

Momentum continues to shift in a more bearish manner bearish as the breakout gathers pace. USD/CAD rates are below their daily EMA envelope, which is fully in bearish sequential order. Daily MACD’s drop below its signal line has continued, while daily Slow Stochastics are holding in oversold territory. Deeper losses should be anticipated over the coming weeks. 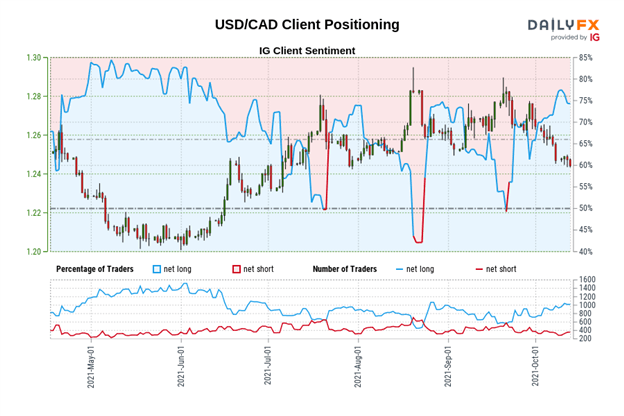