The Canadian Dollar has experienced quite a bit of volatility recently. USD/CAD’s 20-day ATR is up nearly +30% from its August low, while CAD/JPY’s 20-day ATR has increased by approximately +17%. Gyrations in US Treasury yields, US equity markets, and oil prices have hampered the Loonie – so too have growing domestic Canadian political issues.

With Canadian economic data proving relatively disappointing in recent weeks – the Citi Economic Surprise Index for Canada sits at +19.9, down from +31.1 at the end of July – the Loonie may still be facing troubles ahead. 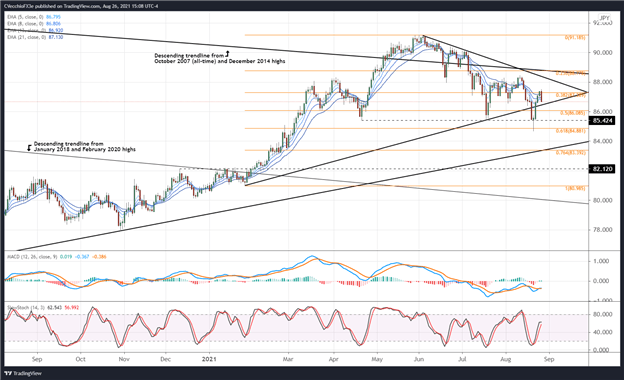 In the update issued on August 9, it was noted that “it’s possible that the pair is funneling into a symmetrical triangle. Nevertheless, persisting below the descending trendline from the October 2007 (all-time high) and December 2014 highs suggests traders should keep an open mindset for more downside – at least for now.”

Symmetrical triangle support was breached, and price action today is producing a bearish outside engulfing bar (or bearish key reversal) on the daily timeframe. Taking a step back, it’s also possible that CAD/JPY is in the midst of carving out a right shoulder in a head and shoulders pattern, which would ultimately target a move closer towards 80.00. More downside looks plausible from here. 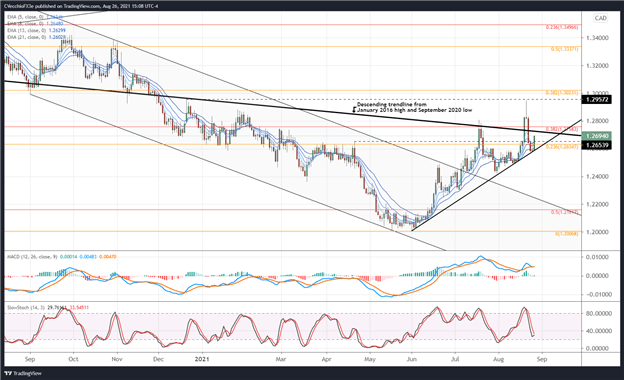 On August 9 it was noted that “another run up to the yearly highs near 1.2800 can’t be dismissed in the short-term.” USD/CAD rates spiked to a fresh yearly high last week, and an evening star candlestick pattern emerged as a near-term top. But USD/CAD rates found support against the rising trendline from the June and August swing lows, suggesting that buying interest remains strong.

This series of ‘higher highs’ and ‘higher lows’ has been buttressed by a potential morning star candlestick cluster forming over the past three days, an indication that gains to and through the descending trendline from the January 2016 high and September 2020 low – a dynamic level of support and resistance over the past year – is possible. As CAD/JPY rates continue to work on a head and shoulders pattern, USD/CAD rates are working on an inverse head and shoulders pattern –both of which spell potentially greater weakness for the Canadian Dollar. 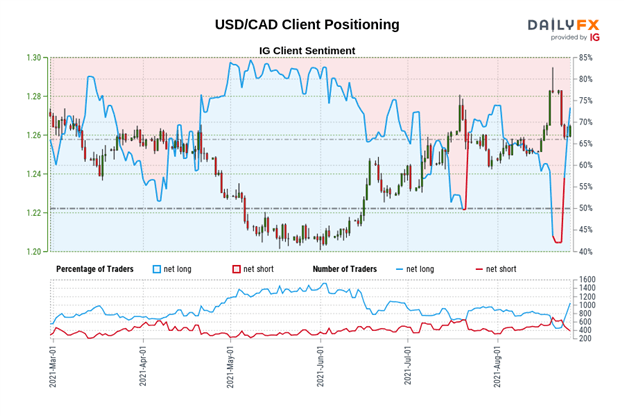