Canadian Dollar bulls continue to flex their muscles and push the Loonie higher. In fact, with USD/CAD price action down another 190-pips since 30 April, the Canadian Dollar is looking set on extending its stretch of strength for the fourth-consecutive month. Recent USD/CAD selling pressure has largely followed a hawkish shift by the Bank of Canada, though broad US Dollar weakness has undoubtedly exacerbated the move. This has propelled the major currency pair to its lowest level since September 2017. 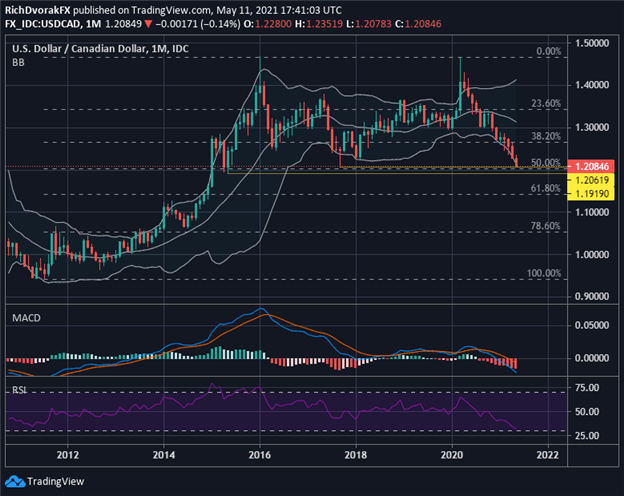 USD/CAD price action currently hovers a mere 30-pips away from its September 2017 swing low at the 1.2060-level. Canadian Dollar bulls might extend their push to probe this technical support level, which is reinforced by the mid-point retracement of USD/CAD’s trading range since it bottomed in July 2011. Taking out this potential area of buoyancy exposes the June 2015 swing low around 1.1920.

The Canadian Dollar is looking a bit overextended, however. This is suggested by the relative strength index, which is on the brink of hitting ‘oversold’ territory. USD/CAD price action is also contending with its bottom Bollinger Band. This technical barrier could help limit Canadian Dollar strength and USD/CAD downside. Failure to maintain this layer of defense could open up the door to the 61.8% Fibonacci retracement level. On the other hand, a rebound attempt could bring the 1.2500-price level into focus for USD/CAD bulls.