The Bank of Canada drew a sharp distinction between itself and other central banks last week when it announced it would begin to taper its QE program. In a world of relative interest rate differentials, the prospect of reduced bond buying provoked a shift to higher Canadian yields relative to their peers (as well as rates pricing per overnight index swaps), providing a jolt to the Canadian Dollar.

As the last week of April rolls on, the Canadian Dollar has sustained last week’s jolt and has translated the momentum to a move back towards its strongest levels of the year. If it were to close at its current price, USD/CAD would set its second lowest close of the year. Meanwhile, CAD/JPY rates have returned into a rising channel while breaking their intramonth downtrend. 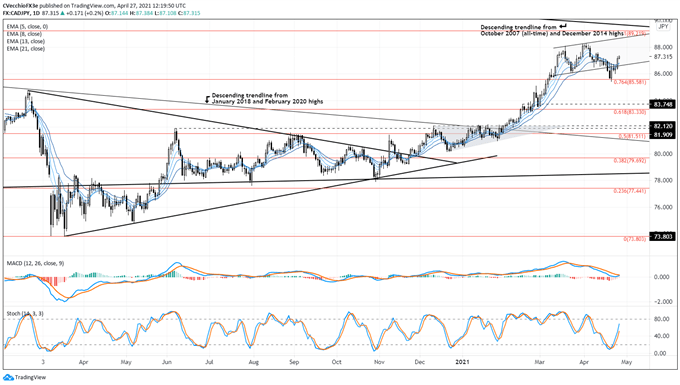 In the update at the start of April, it was noted that “while the continuation effort has a bullish tone, we can’t dismiss the fact that we may encounter more choppiness within the range before another attempt higher.” CAD/JPY rates experienced that expected choppiness, pulling back to the 76.4% Fibonacci retracement of the 2018 high/2020 low range at 85.58 before finding support.

But in finding support at the Fibonacci retracement, CAD/JPY rates also returned the parallel rising channel (perhaps an iterative continuation pattern). It appears that price action in April was merely a temporary setback before CAD/JPY continues its rally towards the descending trendline from the October 2008 (all-time high) and December 2014 highs, coinciding with 89.22, the 100% Fibonacci retracement of the 2018 high/2020 low range. 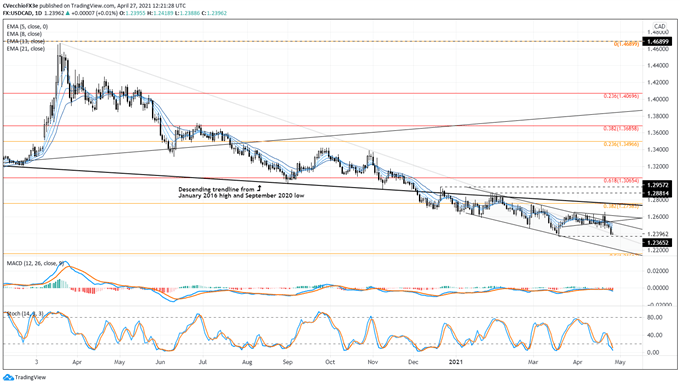 USD/CAD rates have been quickly accelerating towards their yearly low following the break of the symmetrical triangle that formed starting in the middle of March. Just a stone’s throw away, the yearly low at 1.2365 – also the daily bullish piercing candle low on March 18 – may soon be achieved. But before then, USD/CAD rates are hovering at the descending trendline from the March and October 2020 highs, effectively the pandemic downtrend.

Momentum is shifting more bearish. USD/CAD rates are below their daily 5-, 8-, 13-, and 21-EMA envelope, which is in bearish sequential order. Daily MACD’s drop below its signal line is deepening, while daily Slow Stochastics are back in oversold territory. The path of least resistance may be lower yet. 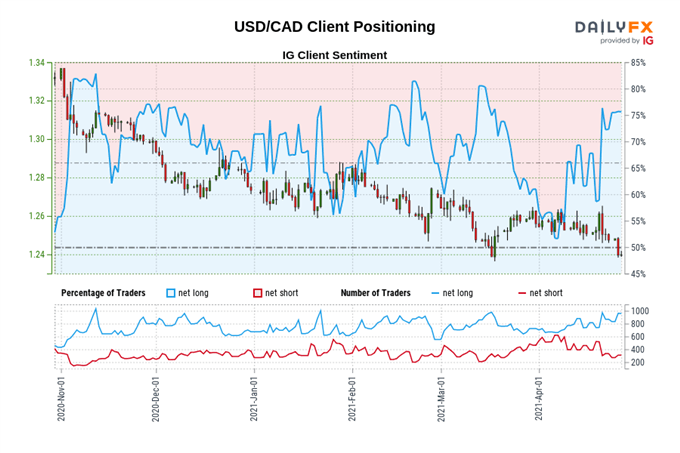