After clocking in as the best performing major currency in March, the Canadian Dollar’s start to April is lacking. The gains on Monday were wiped out by end of trading on Tuesday. But since we last checked in at the end of both March and 1Q’21, not much has changed: the Bank of Canada doesn’t meet again until April 21, and generally improving Canadian economic data (via the Citi Economic Surprise Index for Canada) has left rates markets with a relatively hawkish hue (compared to, say, three months ago).

Having entered a bullish period of the year for the Canadian Dollar, and equally importantly, the worst time of the year for the US Dollar, it’s far too soon to chalk the rocky start to the week for the Loonie as the beginning of the unwind of March’s gains. 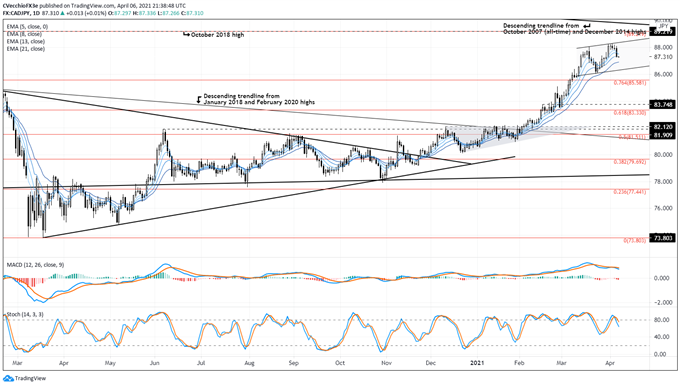 Although CAD/JPY rates punctured the March 18 bearish key reversal high to end March at fresh yearly highs, it appears that the sideways channel/bull flag drawn was misidentified; a redrawing shows a parallel rising channel (perhaps an iterative continuation pattern). To this end, the redrawn consolidation still appears to be a “temporary setback before CAD/JPY continues its rally towards the descending trendline from the October 2008 (all-time high) and December 2014 highs. Before then, the October 2018 may come into focus at 89.22 (which is incidentally the 100% Fibonacci retracement of the 2018 high/2020 low range).”

However, after the losses on Tuesday, CAD/JPY rates have seen momentum shift abruptly. The pair is still below its daily 5-, 8-, 13-, and 21-EMA envelope, which is otherwise in bullish sequential order. Daily MACD’s drop in bullish territory is gaining pace, while daily Slow Stochastics are dropping from overbought territory. Overall, while the continuation effort has a bullish tone, we can’t dismiss the fact that we may encounter more choppiness within the range before another attempt higher. 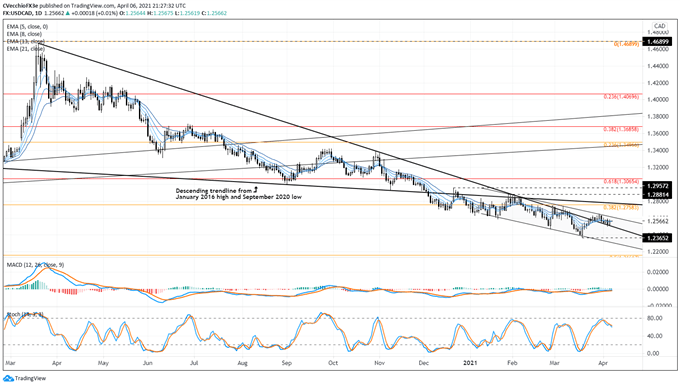 As noted in last week’s updated, “USD/CAD rates were the worst performing CAD-cross throughout March,” and thus it may not surprise some that the pair has failed to turn lower in a significant manner despite ongoing weakness in the broader DXY Index. Nevertheless, there have been some noteworthy technical developments at the start of the new week.

The pair is right back to its daily 5-, 8-, 13-, and 21-EMA envelope, which is in neither bearish nor bullish sequential order. Daily MACD remains below its signal line as it continues its climb, yet Slow Stochastics are continuing to fall towards their median line. With the rally on Tuesday, USD/CAD rates have treated the descending trendline from the March and October 2020 highs as support.

USD/CAD rates are thus in a bit of ‘no man’s land’ at present time with the pair still below the descending trendline from the January 2016 high and September 2020 low. It may be the case that there is an attempt higher back to this trendline, which collides with the 38.2% Fibonacci retracement of the September 2012 low/January 2016 high range at 1.2758 over the course of April.

As far as US Dollar weakness goes, there may be other places to take advantage of the seasonal tendency than in USD/CAD rates at present time. 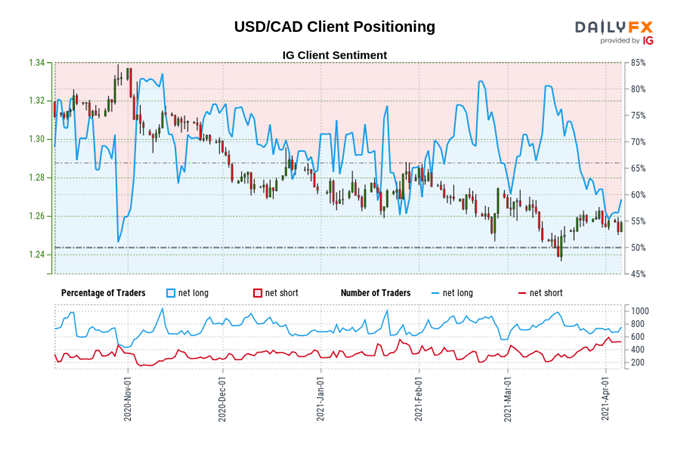