The Canadian Dollar has had a better month than you might expect: it’s been the best performing major currency. Gaining more than +4% month-to-date (with just hours to go) against the Euro, Japanese Yen, New Zealand Dollar, and Swiss Franc, the Loonie has been showing strength against all sorts of currencies: growth, value, and safe haven alike.

In an encouraging sign, much of this has been done absent an improvement in the Canadian vaccination program, which continues to lag much of the developed world (and thus remains a potent catalyst in the future should vaccinations accelerate). Instead, steadily improving economic data has been to credit, with the Citi Economic Surprise Index for Canada rising from +9.8 at the start of the month to +38.7 to close March.

Buoyed by energy prices around the Suez Canal crisis, the Canadian Dollar was able to weather an otherwise rocky month for growth-sensitive assets, and as we move into a friendly part of the year for riskier assets, pairs like USD/CAD and CAD/JPY appear positioned for more Canadian Dollar strength. 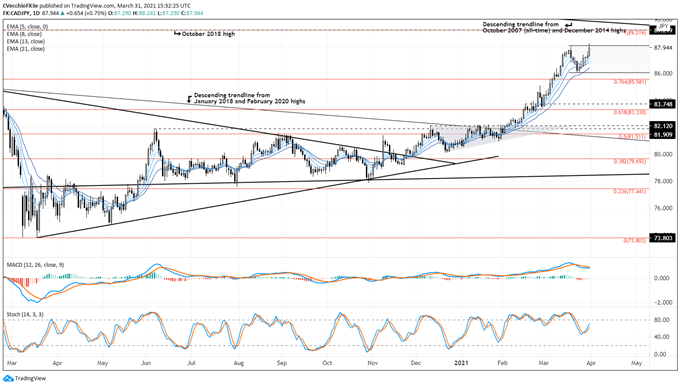 CAD/JPY rates are ending March at fresh yearly highs, having punctured the March 18 bearish key reversal high. The bull flag that may have been forming over the past two weeks merely appears to be a temporary setback before CAD/JPY continues its rally towards the descending trendline from the October 2008 (all-time high) and December 2014 highs. Before then, the October 2018 may come into focus at 89.22 (which is incidentally the 100% Fibonacci retracement of the 2018 high/2020 low range).

CAD/JPY rates are still above their daily 5-, 8-, 13-, and 21-EMA envelope, which is in bullish sequential order. Daily MACD’s drop in bullish territory is slowing, while daily Slow Stochastics are rising back towards overbought territory (having never fallen below their median line). The path of least resistance appears higher. 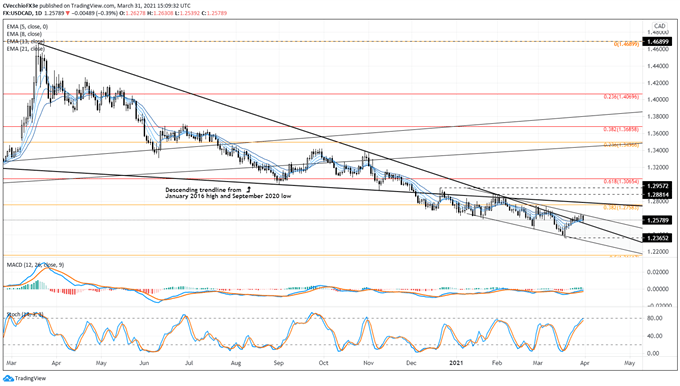 USD/CAD rates are the worst performing CAD-cross throughout March, even though the pair is down by -1.27%. Given the strength in the broader DXY Index, it’s not necessarily a surprise that the USD-pair isn’t performing like the rest of the CAD-complex. But insofar as trading is a function of both price and time, USD/CAD rates are no longer trading below the descending trendline from the March and October 2020 highs. Seeing as how the pair remains below the descending trendline from the January 2016 high and September 2020 low, it may be the case that USD/CAD rates still have a bearish bias, even if Canadian Dollar strength may lag in this pair relative to other CAD-crosses (in particular, CAD/JPY).

With that said, the relative descending channel USD/CAD rates have found themselves in since early-2021 suggests that the pair is at resistance and may soon turn lower. USD/CAD rates are back below their daily 5-, 8-, 13-, and 21-EMA envelope, which is in neither bearish nor bullish sequential order. Daily MACD remains below its signal line, while Slow Stochastics are starting to fade before reaching overbought territory. With technical studies of momentum indicators not showing strong favor towards a bearish move, this is more evidence that CAD/JPY rates may be a better expression of Canadian Dollar strength in the near-term. 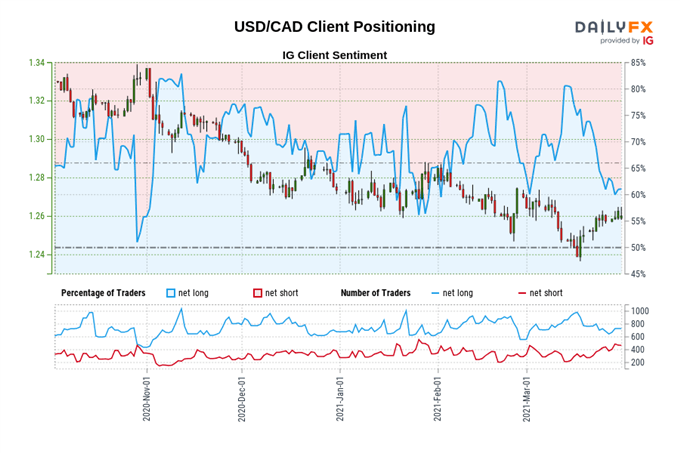