USD/CAD remains on the radar as a candidate for an explosive move against its primary trend. The grinding price action of the last few months has been difficult to fight, but hasn’t resulted in prices all that lower than where we were a few months ago.

The narrowing swings with both a top and bottom-side trend-line could soon lead to a big squeeze higher. Both trend-lines have seen quite a bit of action recently, with the top-side trend-line the primary focus right now.

If it maintains as resistance, and for now it should be respected as such, then the trend remains towards another swing to a cycle low. However, if the trend-line breaks with authority then we could see a quick move towards the highest levels in several months.

First up on a breakout would be 12747 followed by 12875 and then a big test of a long-term threshold around the 13000-line. Of course, the trend-line could break and price momentum fizzles out quickly, so it would ideal to see the trend-line broken without hesitation following.

From a tactical standpoint, the line-in-the-sand is being tested right now. For would-be shorts, this is an attractive spot from a risk/reward perspective. For would-be longs, a climb above resistance is needed to get upward momentum into gear. 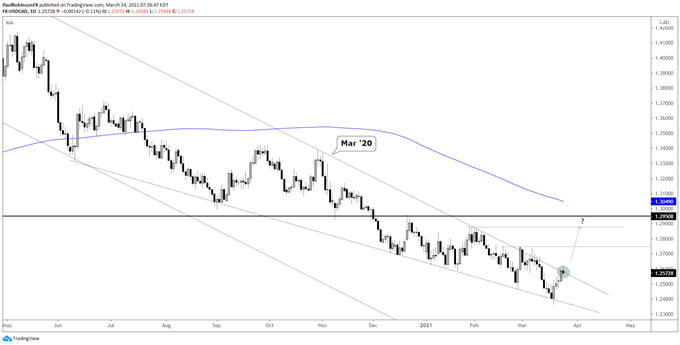