The commodity-sensitive Canadian Dollar looks poised to extend gains against its major counterparts, as a flurry of bullish technical setups take shape across several CAD crosses. Here are the key levels to watch for USD/CAD, CAD/JPY, CAD/CHF and EUR/CAD rates. 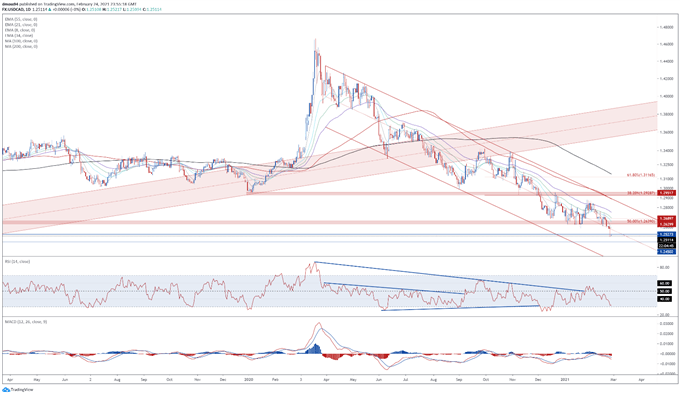 The Canadian Dollar has significantly outperformed the US Dollar in recent months, climbing over 2% higher from the yearly open to its highest levels since early 2018. This period of strength looks set to endure as the USD/CAD exchange rate slices through key support at the April 2018 low (1.2527).

With the slopes of all 6 moving averages notably diving lower, and the RSI and MACD tracking firmly below their respective neutral midpoints, the path of least resistance seems skewed to the downside.

However, bullish RSI divergence suggests that a short-term rebound higher could be on the cards, if psychological support at 1.2500 remains intact. Nevertheless, an extended rebound back above former support-turned-resistance at the January low (1.2589) seems relatively unlikely.

Therefore, a more extended push lower seems on the cards in the near-term, with a daily close below 1.2500 probably intensifying selling pressure and carving a path for price to challenge the 2018 low (1.2247). 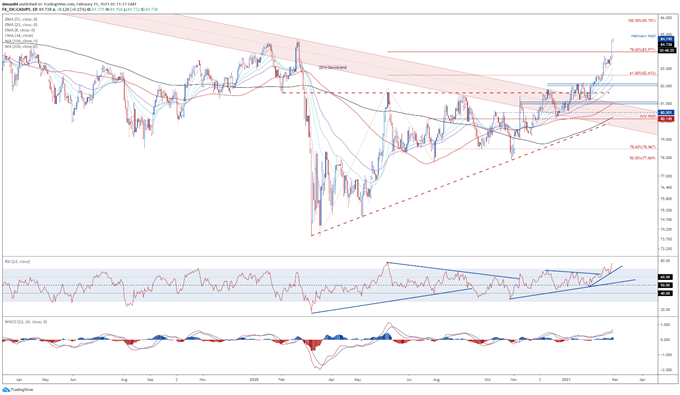 The Loonie has also surged higher against the Japanese Yen since the start of the year, soaring over 4.5% to challenge key resistance at the February 2020 high (84.74). Bullish moving average stacking, in combination with the RSI surging to its highest levels since June 2020, suggests that the exchange rate may continue to climb higher in the coming months.

However, there is a possibility that the recent burst higher is relatively overextended, leaving it vulnerable to a short-term pullback if price fails to gain a firm foothold above psychological resistance at 85.00. In this case, a short-term pullback towards former resistance-turned-support at the 78.6% Fibonacci (83.97) could precede the next impulsive topside move.

Breaching that could trigger a more extended pullback towards the February 17 low (83.03). On the other hand, a daily close above 85.00 could encourage would-be buyers and carve a path for price to challenge the 100% Fibonacci (85.70). 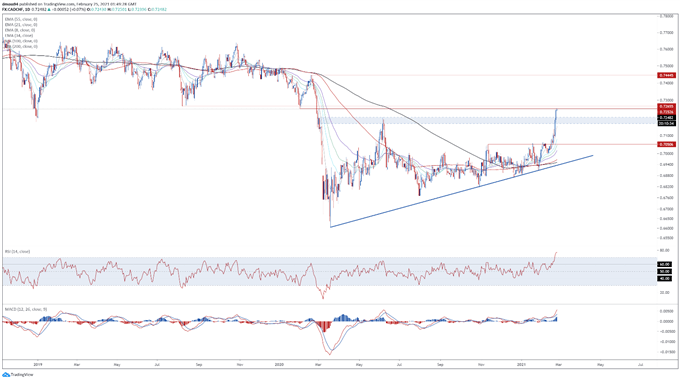 The CAD/CHF exchange rate has exploded higher in recent days, after slicing easily through key resistance at the November 2020 high (0.7051). With price surging above range resistance at 0.7170 – 0.7200, and the RSI soaring to its most extreme levels since 2017, a more extended topside push looks more than likely in the coming weeks.

However, if buyers fail to hurdle the August 2019 low (0.7265) a counter-trend move back towards former resistance-turned-support at the June 2020 high (0.7203) may precede an eventual extended topside move. Ultimately, a daily close above 0.7270 is needed to signal further upside and carve a path for buyers to begin challenging the 2020 high (0.7445). 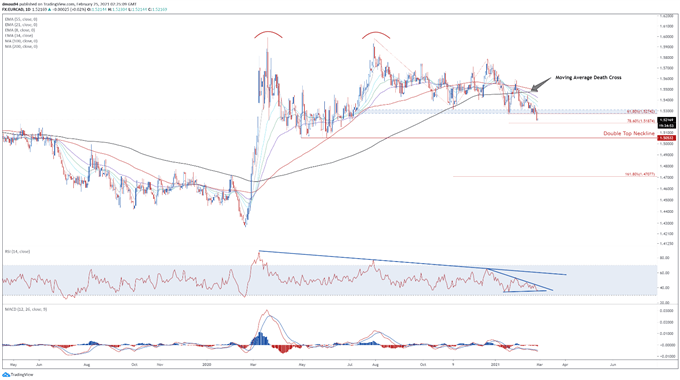 The Euro also looks set to continue sliding lower against the commodity-sensitive Canadian Dollar, as EUR/CAD plunges below the 61.8% Fibonacci (1.5274) to its lowest levels in 9 months. A moving average ‘death cross’ formation, in tandem with the MACD falling to its lowest levels in a year, suggests the path of least resistance is lower.

A daily close below psychological support at 1.5200 is ultimately needed to generate a test of the 78.6% Fibonacci (1.5187), with a convincing break below that bringing the neckline of the Double Top pattern carve out in August into focus.

However, if 1.5200 successfully neutralizes near-term selling pressure, a relief rally back towards range resistance at 1.5275 – 1.5300 could be on the cards.