The Canadian Dollar is catching a bid as the light, holiday week US trading session gets underway in New York, thanks in part to news flow boosting risk appetite, with equity markets and crude oil prices turning higher. With outgoing US President Donald Trump signing the fiscal stimulus deal, simultaneously warding off another government shutdown, relief has been felt throughout markets that the US economy will not endure a self-inflicted wound, marring an already uncertain 1Q’21 outlook.

With its southern neighbor back on a more straight and narrow path towards cushioning its economy, the Canadian Dollar is gaining favor once more as a vehicle for risk appetite in FX markets. It is still the case that the Bank of Canada is keeping its policy on hold for a long while, having closed off the possibility to drop main rate into negative territory. Canadian economic data continues to improve, as per the Citi Economic Surprise Index for Canada, economic data momentum is at its highest rate in a month.

This, the final week of the year, may see the end of the year-end profit taking and repositioning that’s been preventing the Loonie from taking flight. With the news flow turning positive (not to mention more good news on the vaccine front with the UK likely to approve the AstraZeneca COVID-19 vaccine as soon as tomorrow, per the Financial Times), the opportunity may have arrived for traders to reassess long entry points heading into 2021. 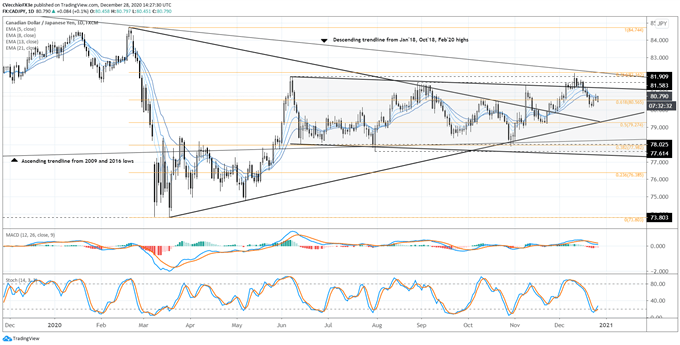 CAD/JPY rates remain within the parallel channel drawn from the downtrend from the June, August, and November highs, but have once again carved out a ‘higher low’ relative to the lows in October and November. This is more evidence that the earlier break of the series of ‘lower lows’ has hinted that “a new regime of bullish trading” has arrived.

We’ve previously said that “given the holiday price action, it’s too soon to say that the CAD/JPY bullish breakout attempt has been denied. It remains true that clearing 81.58 and 81.91 [on a closing basis] would be strong indications that CAD/JPY rates were embarking on an earnest bullish breakout attempt.” This perspective remains valid, especially as CAD/JPY rates are starting to regain bullish momentum. CAD/JPY rates are above their daily 5-, 8-, 13-, and 21-EMA envelope, which is in neither bearish nor bullish sequential order. Daily MACD is starting to turn higher while in bullish territory, and daily Slow Stochastics have risen out of oversold territory.

While the CAD/JPY chart suggests more patience is required, traders should be on alert for another attempt at parallel channel resistance in the 81.58 to 81.91 zone in the next week or two. 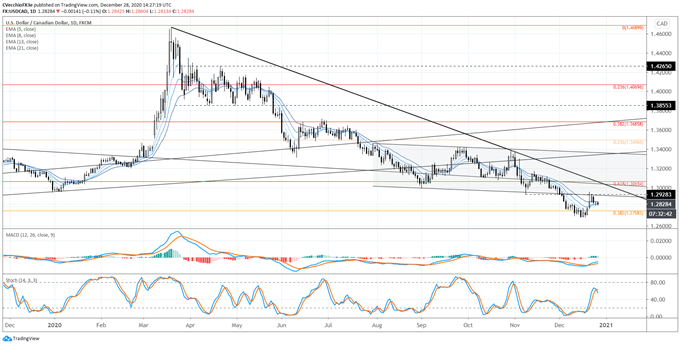 USD/CAD rates have stopped in their advance, capped by the early-November swing low at 1.2928, which is also former support from the descending channel between late-July and early-December. It’s been previously noted that “a lack of enthusiasm on the way higher still suggests that the break of the uptrend from the 2012 and 2018 swing lows offers more evidence of a long-term double top coming into play.” This perspective remains valid at present time.

USD/CAD rates are now below their daily 5, 8-, 13-, and 21-EMA envelope, which is in neither bearish nor bullish sequential order. Daily MACD is starting to narrow and turn, while remaining below its signal line, and daily Slow Stochastics have started to turn lower, having failed to reach overbought territory. USD/CAD rates may be on the verge of another swing to the downside. 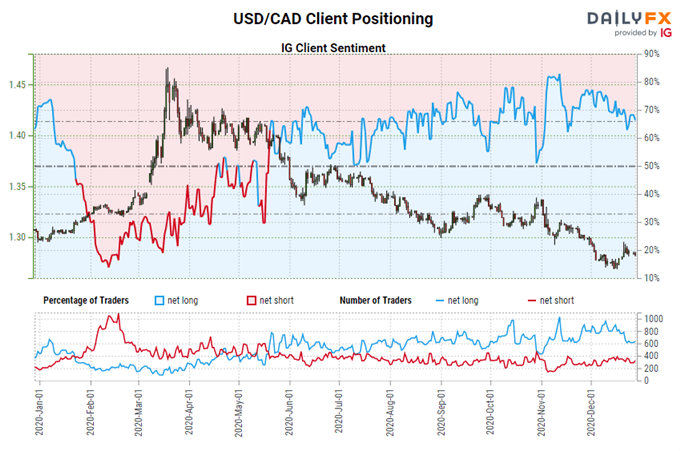