The Canadian Dollar, one of the best performing major currencies since the end of March, has endured what appears to be a brief round of profit taking at year-end. The losses seen by various CAD-crosses, including CAD/JPY (trading lower) and USD/CAD (trading higher) dovetails with a period of diminished risk appetite, even as the US fiscal stimulus deal has come into focus. But traders may not be ready to fret yet: the fundamentals undergirding the Canadian Dollar remain strong.

After all, the Bank of Canada appears to be in a long pauses with respect to policy, eschewing calls to dip their main rate into negative territory. The Canadian government has provided ample fiscal support, preventing the Canadian economy from dealing with the same volatility that its American counterpart to the south has experienced in recent months. In fact, Canadian economic data has been getting better: according to the Citi Economic Surprise Index for Canada, the Great White North has seen economic data outperform expectations at their best clip in a month.

Recent losses by the Canadian Dollar are properly contextualized by the calendar: it’s year-end, with profit taking afoot across the board. Traders may see the recent pullback in the Loonie as an opportunity to reassess long entry points heading into 2021. 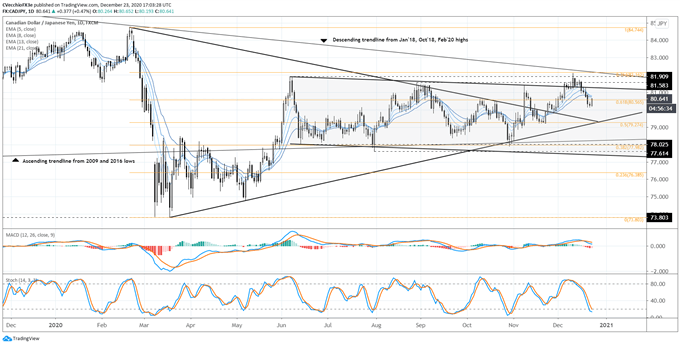 After probing topside resistance, CAD/JPY rates have fallen back within the parallel channel drawn from the the downtrend from the June, August, and November highs. It still holds that breaking through the series of lower lows indicates that “a new regime of bullish trading” has taken root. To this end, given the holiday price action, it’s too soon to say that the CAD/JPY bullish breakout attempt has been denied. It remains true that “clearing 81.58 and 81.91 [on a closing basis] would be strong indications that CAD/JPY rates were embarking on an earnest bullish breakout attempt.”

As such, CAD/JPY rates are losing momentum, even as price action has provided a rebound (and the early trappings of a morning star candle cluster). While daily MACD remains in bullish territory, it is declining towards its signal line. Daily Slow Stochastics have already reached oversold territory. CAD/JPY rates below their daily 5-, 8-, 13-, and 21-EMA envelope, which is in neither bearish nor bullish sequential order. CAD/JPY is a waiting game, perhaps until 2021. 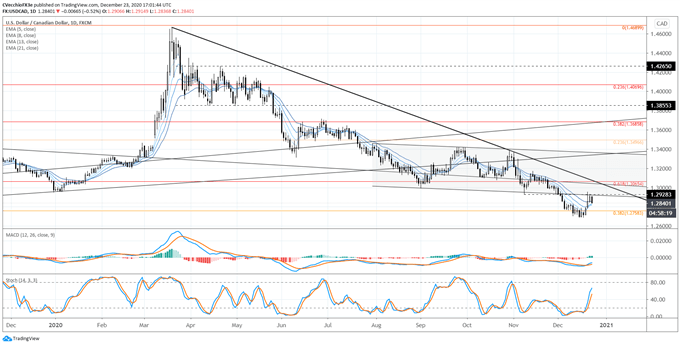 USD/CAD rates have recently rebounded from longer-term Fibonacci retracement, the 38.2% retracement from the 2012 low to 2016 high at 1.2758, but nothing more has been had. Gains have been capped by the early-November swing low at 1.2928, which also constitutes former support in the descending channel between late-July and early-December. A lack of enthusiasm on the way higher still suggests that the break of the uptrend from the 2012 and 2018 swing lows offers more evidence of a long-term double top coming into play.

USD/CAD rates are now above their daily 5, 8-, 13-, and 21-EMA envelope, which is in neither bearish nor bullish sequential order. Daily MACD is rising but remains below its signal line, while daily Slow Stochastics are racing towards overbought territory. A mirror image of CAD/JPY on the day, USD/CAD appears to be working on an evening star candle cluster – a topping pattern that calls for more losses. 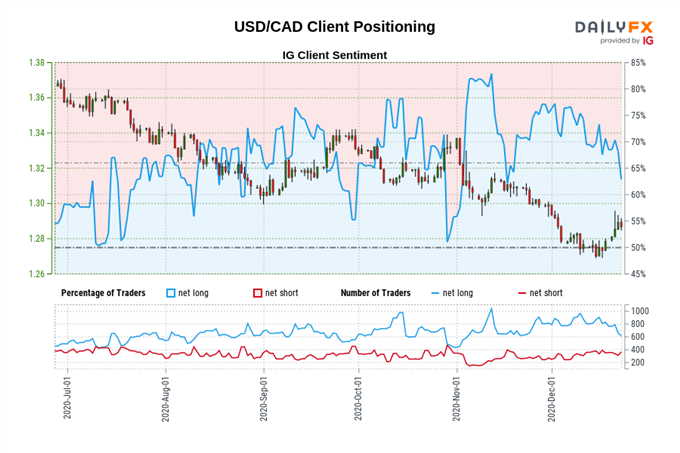