The Canadian Dollar remains one of the best performing major currencies in the wake of the US elections, and now that coronavirus vaccine deployment has begun in the UK and US, global optimism continues to surge (Brexit and a lack of a US fiscal deal are the only flies in the ointment at this time). In light of strength seen in the Canadian economy in recent weeks (in particular, the November Canadianjobs report), traders have amped up their bets that not only will the Canadian economy outperform moving forward, but that Bank of Canada policymakers won’t be able to do much to stop CAD appreciation. 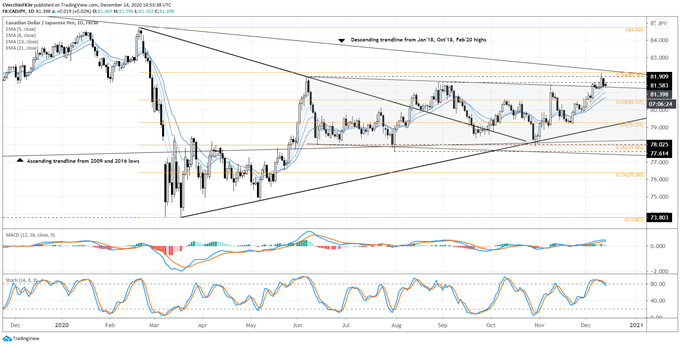 Over the past week, CAD/JPY rates have probed topside resistance, breaking through the downtrend from the June, August, and November highs. Closing through some of these recent highs, however, is a different story; only once over the past week. That said, there is growing evidence that the break of the series of lower lows will has given way to a new regime of bullish trading. It still holds that “clearing 81.58 and 81.91 would be strong indications that CAD/JPY rates were embarking on an earnest bullish breakout attempt.”

As such, CAD/JPY rates are maintaining bullish momentum, even as price action has been staggered around the November swing high at 81.58. Daily MACD continues to trend higher in bullish territory, and the pullback in daily Slow Stochastics has yet to see the overbought condition lost in its entirety. With CAD/JPY rates above their daily 5-, 8-, 13-, and 21-EMA envelope, which is in bullish sequential order, the path of least resistance still appears to be higher. 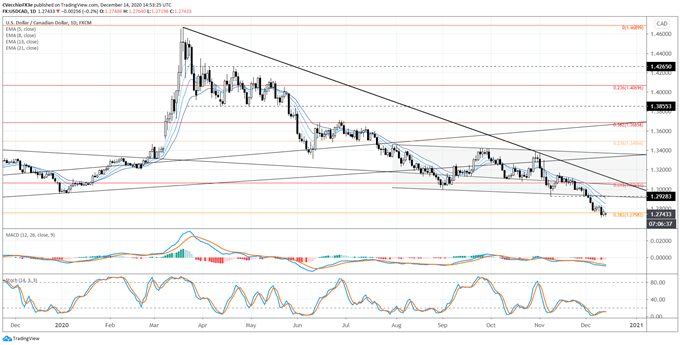 We continue to track the USD/CAD path lower, which retains robust bearish momentum. Having previously lost a longer-term Fibonacci retracement, the 38.2% retracement from the 2012 low to 2016 high at 1.2758, more evidence is cropping up that significant technical damage has transpired. Ongoing weakness following the break of the uptrend from the 2012 and 2018 swing lows offers more evidence of a long-term double top coming into play.

USD/CAD rates continue to trade below their daily 5, 8-, 13-, and 21-EMA envelope, which is in bearish sequential order. Daily MACD is trending below its signal line, while daily Slow Stochastics are nestled in oversold territory. It is still the case that “the path of least resistance is lower for USD/CAD rates, at least until the daily EMA envelope is broken (USD/CAD rates close above the daily 21-EMA). A near-term bounce higher won’t negate the significant technical damage done in recent weeks.” 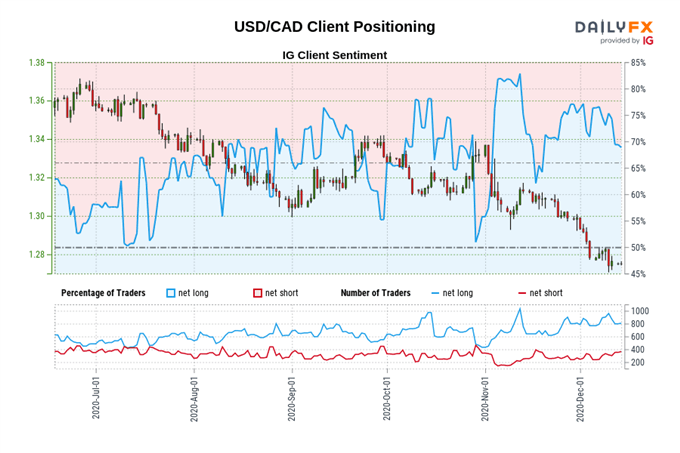