The Canadian Dollar proved weaker in September, the first time since March that USD/CAD rates posted a month-over-month gain. But the start of October has already proven beneficial for the Loonie, with energy markets and equity markets rallying alongside optimism that a new fiscal stimulus package will be coming from the United States. More evidence that the Canadian economy is weathering the coronavirus pandemic with a strong September Canada jobs report is due at the end of the week, and so long as general risk appetite continues to improve, the Canadian Dollar may be well-positioned to advance versus the Japanese Yen and Us Dollar.

While the Canadian economy continues to show signs of progress, it must be considered that 20% of Canadian GDP is tied to economic activities with the US; as long as the world’s largest economy continues to struggle to contain the COVID-19 outbreak, the Canadian economy may find difficulty reaching its full potential. As such, it still holds that “the Bank of Canada still sees too much uncertainty to make any significant changes in the near-term.” 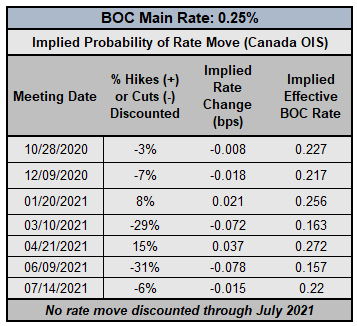 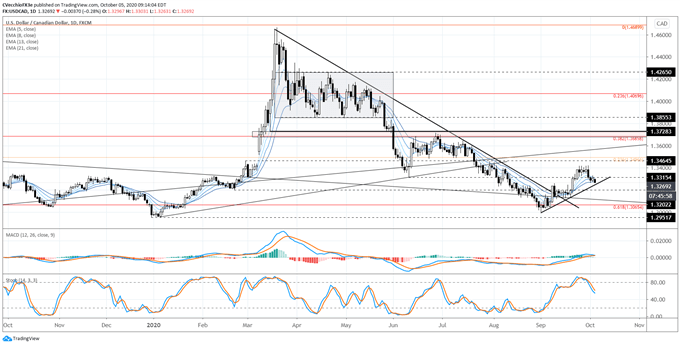 The USD/CAD rate rally stalled ahead of the late-February swing high (which proved to break with a gap higher in mid-March), noted by several daily inverted hammers last week. Now, USD/CAD rates are below their daily 5, 8-, 13-, and 21-EMA envelope, which is not quite yet in bearish sequential order. Daily MACD is trending lower at its signal line, while Slow Stochastics are falling towards their median line. If the uptrend from the September swing lows is broken, USD/CAD rates could reverse quickly. The September 30 bearish engulfing bar high at 1.3250 would be key resistance to discern whether or not the potential for further losses remains. 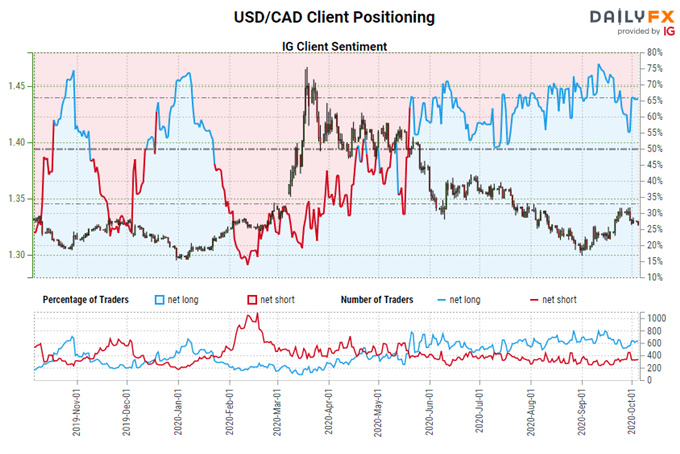 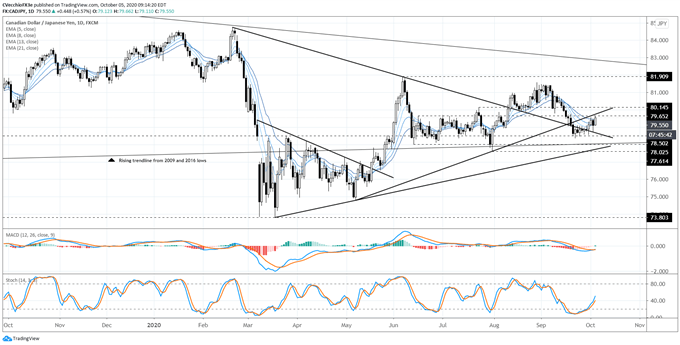 CAD/JPY rates are risen back to the rising trendline from the May and July swing lows, having found support at former triangle resistance from the February and June highs. CAD/JPY has seen bearish momentum ease, with CAD/JPY rates above their daily 5-, 8-, 13-, and 21-EMA envelope, which has only recent lost bullish sequential order. Daily MACD is trending higher albeit below the signal line, while Slow Stochastics have risen through their median line. Gains through 80.000 this week would be a strong sign that CAD/JPY rates have indeed made a meaningful turn higher.