Canadian Dollar Begins to Slip Back

After five consecutive months of gains, the Canadian Dollar has struggled through the first half of September. Both CAD/JPY and USD/CAD rates are moving counter to trends in recent months, with the low yielding safe haven currencies finding traction despite ongoing strength in global equity markets. As energy markets have stabilized in recent weeks, a lack of significant upside in oil prices may, in part, be responsible for why the Canadian Dollar has struggled to build on what had been otherwise significant price action developments.

Bank of Canada on Hold, Still

Canadian economic data has started to stabilize itself, after enduring a brief period where it began to underperform alongside its southern neighbor amid the United States’ summer surge in the coronavirus outbreak. But as the US economy is moving forward and gaining more momentum, the Canadian economy is likely to catch a tailwind as well; after all, 20% of Canadian GDP is tied to economic activities with the US. That said, the Bank of Canada still sees too much uncertainty to make any significant changes in the near-term, as was divulged at their September policy meeting last week. 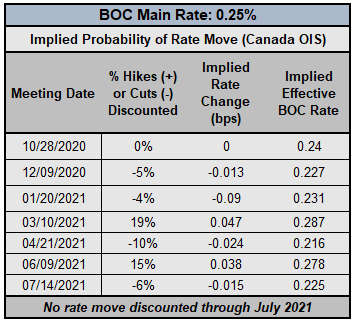 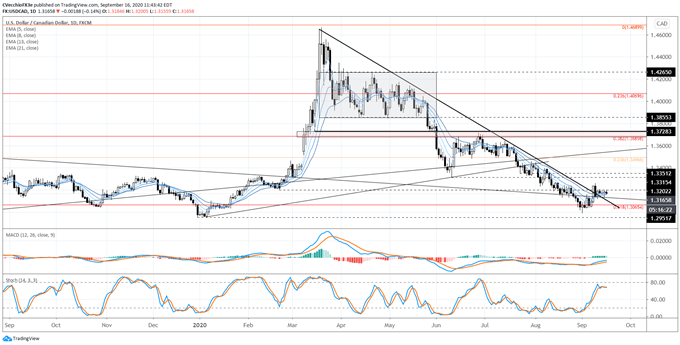 The downtrend from the March and May swing highs no longer is intact, and we thus are following USD/CAD price action around a potential reversal higher. Price action has been flagging since the bullish reversal attempt last week, which can be interpreted two ways: a lack of enthusiasm for a bullish move; or, the market digesting a positioning change as speculative and commercial traders change views.

Bullish momentum has eased over the past few days. USD/CAD rates are right at their daily 5, 8-, 13-, and 21-EMA envelope, which is in neither bearish nor bullish sequential order. Daily MACD is trending higher albeit below its signal line, while Slow Stochastics have stopped advancing just below oversold territory. While the pair has struggled to reverse higher, a move through the September high at 1.3260 would signal continuation. 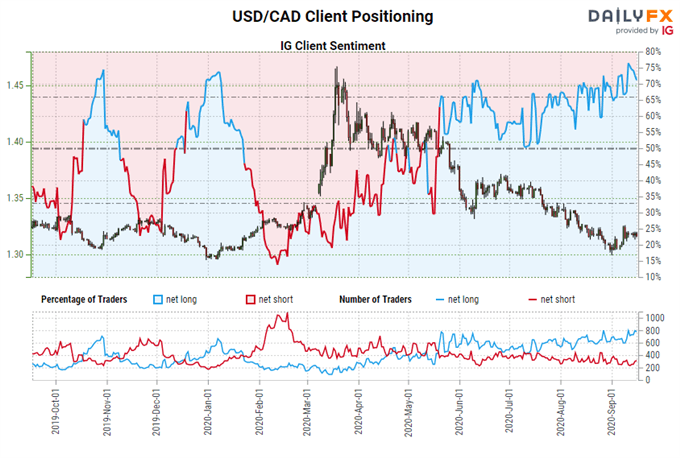 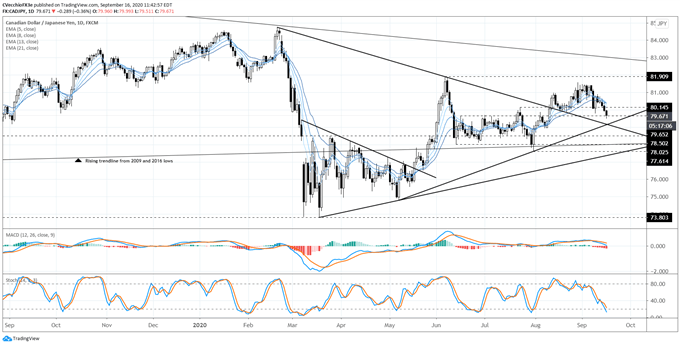 CAD/JPY rates failed to clear to the June high at 81.91, and now the rising trendline from the May and July swing lows is coming into focus. Similar to USD/CAD rates, CAD/JPY has been losing momentum through September after an impressive five month run. Falling below the July high, CAD/JPY rates are gaining momentum to the downside. CAD/JPY rates are below their daily 5-, 8-, 13-, and 21-EMA envelope, which is aligning in bearish sequential order. Daily MACD is falling towards the signal line, while Slow Stochastics have fallen into oversold territory. Failure below the May/July trendline would signal an increased likelihood of a deeper reversal.