Alongside the dramatic plunge in oil prices at the start of this week, the Canadian Dollar briefly flirted with establishing fresh monthly lows in CAD/JPY and USD/CAD rates, but stability in energy markets in the past 24-hours has given the Loonie some breathing room. But is this breathing room here to stay? A look at the recent events in energy markets suggests otherwise.

Like its American counterpart WTI crude oil, the benchmark for North American oil prices, Canada’s Western Canadian Select oil prices fell into negative territory. That storage capacity across North America is fully utilized is simply a function of supply and demand: the coronavirus pandemic has destroyed demand for energy; and therefore, there is an oversupply. Until demand returns, this supply imbalance will remain.

To this end, if the Canadian Dollar rally has hinged on a rebound in energy markets, do we really believe that the supply and demand issues facing energy markets have been fully resolved? Until both the Canadian and US economies begin to open and lift the veil of The Great Lockdown, it may not be wise to suggest so.

The Bank of Canada’s place in the response to the coronavirus pandemic appears to be settled. After immediately cutting the main interest rate to an all-time low of 0.25%, the BOC has been sitting on its hands. At the April BOC policy meeting, rates were kept on hold while new financial market stability mechanisms were announced in order to help keep credit flowing to businesses and households. 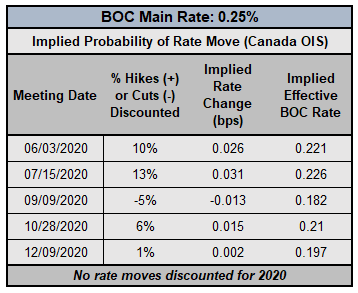 According to Canada overnight index swaps, rates markets think that the BOC is done operating via the traditional interest rate mechanism and will instead focus on extraordinary policy efforts, similar to the Federal Reserve to the south. Through the end of 2020, there is only a 1% chance of a rate hike, and the maximum probability for a rate cut arrives in September at 5%. 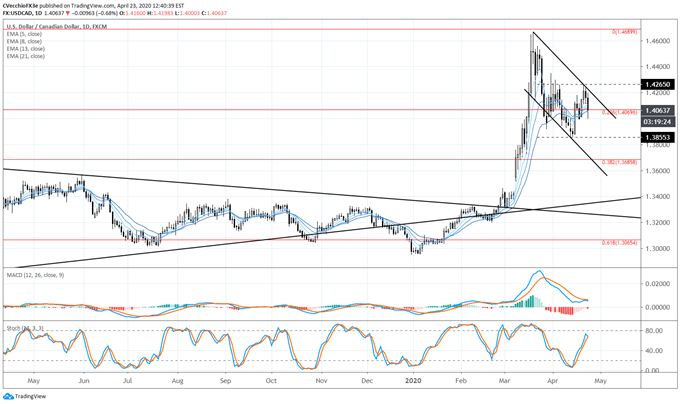 The symmetrical triangle in place in USD/CAD rates earlier this month proved to have a flat resolution, suggesting that the interpretation of price action was invalid. Regardless, there has been no significant development in price action, as it now appears that a descending channel has been carved out relative to the March and April swing highs.

But given the context of how this descending channel was formed – after a sharp uptrend – it’s very possible that this is a bull flag continuation effort in context of the bullish breakout move from late-February. Along these lines, there is little agreement among momentum indicators, insofar as USD/CAD’s drop today stands in contrast to the prevailing price action over the past week-plus.

Slow Stochastics, which has been rising over the past two weeks, are readying to turn lower while above the median line – an indecisive reading. Similarly, daily MACD is trending lower, but in bullish territory – another indecisive reading. USD/CAD rates are back at the daily 5-, 8-, 13-, and 21-EMA envelope, which is in neither bearish nor bullish sequential order.

Given the context of the market environment and USD/CAD price action, traders may be apt to wait for further confirmation that continuation to the upside will develop before entering into any trades. 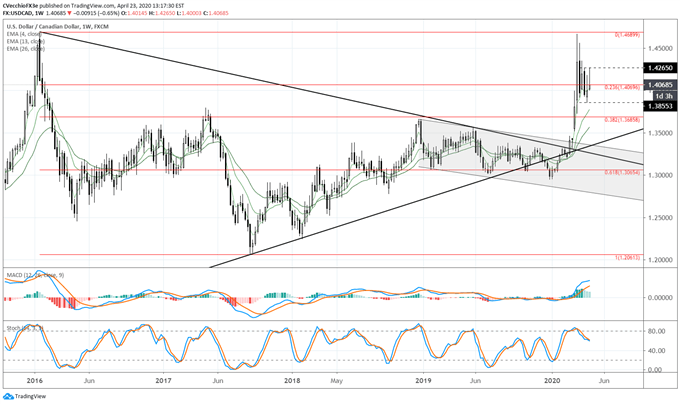 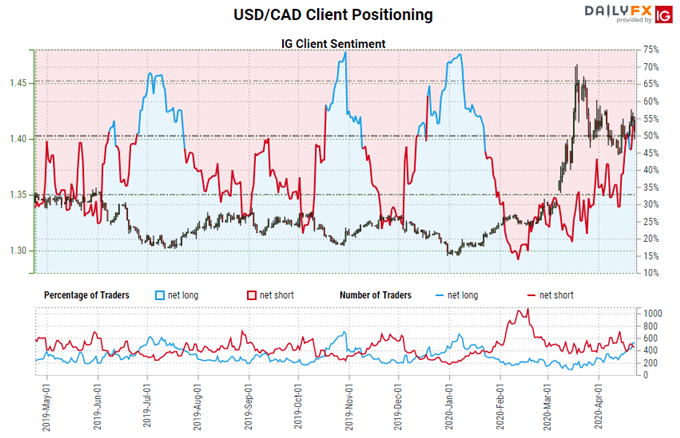 Positioning is more net-short than yesterday but less net-short from last week. The combination of current sentiment and recent changes gives us a further mixed USD/CAD trading bias. 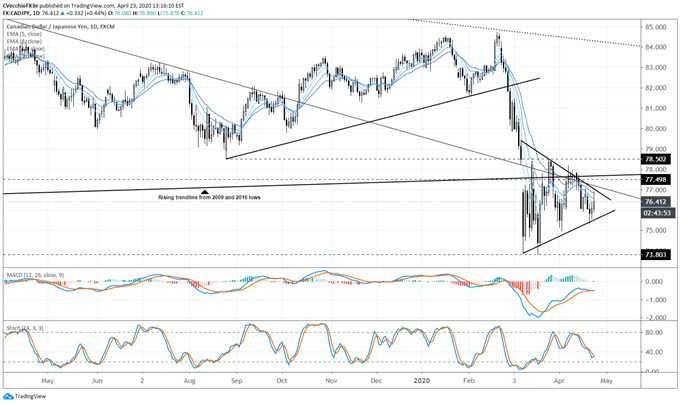 The interpretation of CAD/JPY price action offered during the April 7 Canadian Dollar forecast update appears to have been invalid, insofar as it was premature to define the shape of the triangle that had been forming: rather than an ascending triangle, it appears that the past six weeks of price action have been carving out a symmetrical triangle.

A symmetrical triangle, in context of the decline in CAD/JPY rates since the end of February, suggests a downside bias for the pair. In the last update it was noted that “the August 2019 low has become formidable resistance that CAD/JPY rates have failed to clear out on the topside twice since the middle of March” – this level has not been breached still.

Further to this point, CAD/JPY rates have not been able to climb back above the rising trendline from the 2009 and 2016 lows – support for the past decade. Failure to re-establish itself through the August 2019 low at 78.50 is a necessary precursor to any trades taken from the long side, in this strategist’s opinion.

Momentum indicators offer little reassurance for an extended recovery higher at this time. Slow Stochastics continue to trend lower below the median line, while daily MACD, after recovering from an extreme negative reading in March, has flatlined and remains below its signal line in bearish territory. 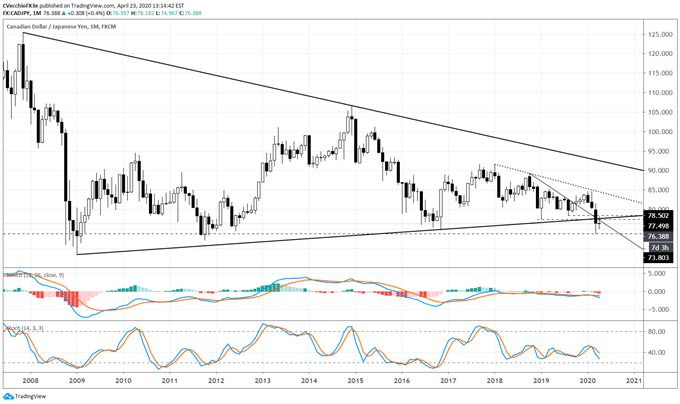