The first week of the second quarter has been kinder to the Canadian Dollar, all things considered. Plagued by fears of a significant economic fallout from the coronavirus pandemic – estimates of Canadian Q2’20 annualized GDP are coming in between -20% and -35% -- the Canadian Dollar suffered a steep -8.35% decline versus the US Dollar, its worst performance since Q1’15.

Yet the Canadian Dollar appears only to go so far as broader risk appetite trends carry it. Crude oil prices have rebounded thanks to hopes for a coordinated supply cut between OPEC, Russia, and the United States, while global equity markets (the US, in particular) continue to run higher (now more than 25% off of their March lows) amid signs that efforts to flatten the curve are starting to bear fruit, opening up the possibility of a return to a semblance of normalcy by the end of Q2’20.

If either crude oil prices tumble (e.g. news comes out of no coordinated supply cut by OPEC, Russia, and the United States) or global equity markets turn lower once again (e.g. news comes out that the rates of coronavirus infections and hospitalizations in hot spots start to rise again in industrialized economies), the Canadian Dollar will find itself in the barrel once more.

The Bank of Canada has been quick to respond to the coronavirus pandemic, preparing the Canadian economy for severely negative economic fallout by cutting their main interest rate to its all-time low of 0.25%. Thanks to the aforementioned optimism that flattening the curve is bearing fruit, market participants now believe that the BOC is likely to remain on hold for the remainder of 2020. 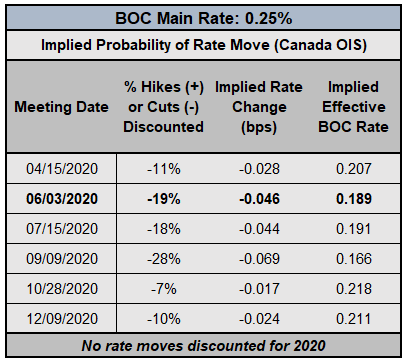 According to Canada overnight index swaps, rates markets are now pricing in a maximum implied probability of 28% for the a 25-bps rate cut this year; and if it were to arrive in 2020, it would come in September. Naturally, given the economic conditions, the market’s bias is tilted towards a rate cut ever so slightly; although at present time, the BOC’s rate cut cycle appears to be finished in the very near-term (19% chance of a 25-bps rate cut by the June 2020 BOC meeting). 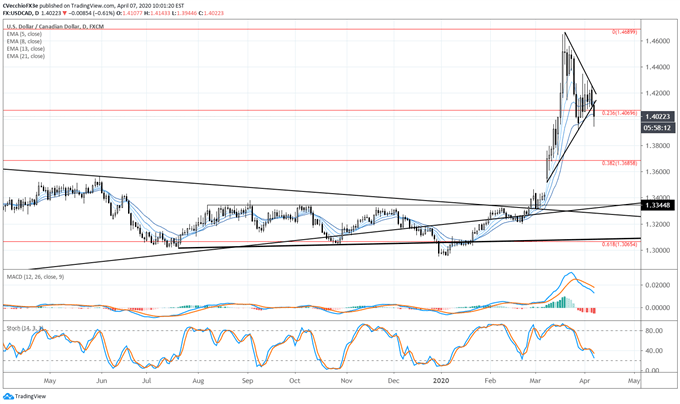 USD/CAD’s gains in March allowed it to rapidly approach its highest level since January 2016, but rates have been in state of consolidation for the better part of two weeks. In the short-term, a symmetrical triangle appears to have formed, and USD/CAD rates are thus far tempting a downside breakout on the daily timeframe.

Support may be tough to break in this area, however. USD/CAD rates are hovering at the daily 21-EMA, while testing the 23.6% retracement of the 2016 high to 2018 low range. A move below this area (1.4035/70) would increase the likelihood of further downside in the near-term; a break below the March 27 low 1.3921 would yield even greater confidence. 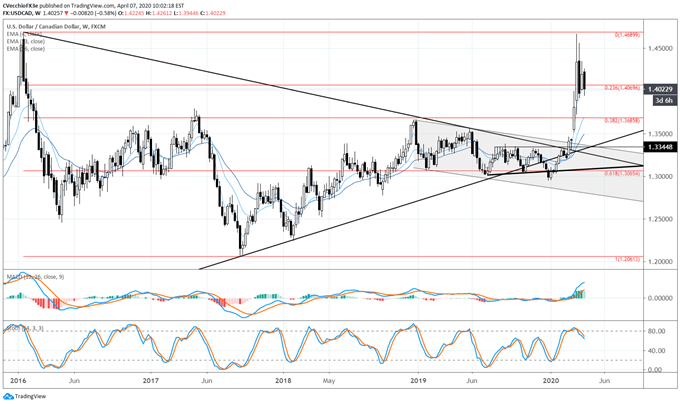 Even in the event of a short-term USD/CAD rate reversal to the downside, the longer-term bias may still be higher for the pair. On the weekly timeframe, USD/CAD rates remain well-above their weekly 4-, 13-, and 26-EMA envelope. Although Slow Stochastics are pulling back from overbought territory, weekly MACD continues to trend higher in bullish territory. 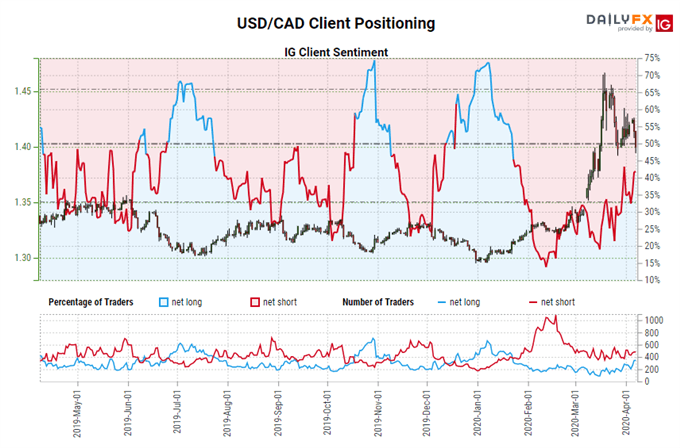 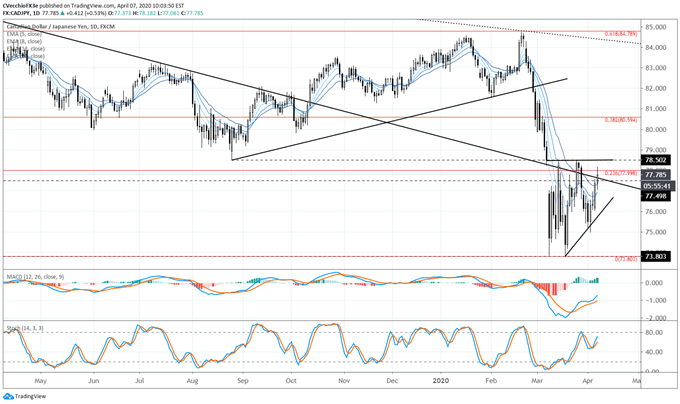 Much like USD/CAD’s reversal to the downside, CAD/JPY’s reversal to the topside in the past few weeks has coincided with a turn higher in crude oil prices and global equity markets. But unlike USD/CAD rates, which have already started to offer scant evidence of further strength in favor of the Canadian Dollar, CAD/JPY has done no such thing; it remains confined in an ascending triangle, the defining consolidation of the past month.

If the CAD/JPY rate reversal to the topside is going to gather any significant pace, we’ll need to see 78.50 cleared out in the short-term: the August 2019 low has become formidable resistance that CAD/JPY rates have failed to clear out on the topside twice since the middle of March.

To this end, momentum continues to recover, neutralizing from its otherwise aggressively bearish tone. Slow Stochastics continue to trend higher above the median line, but daily MACD, while trending higher, remains in bearish territory. 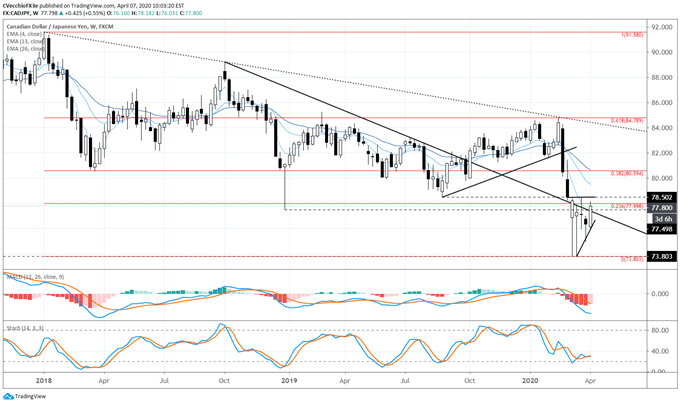 Bigger picture for CAD/JPY rates: there is much ground to be made up to get back to the 2020 highs established in late-February. But clearing out 78.50 will also see CAD/JPY rates rise above the descending trendline from the October 2018 and July 2019 lows, offering another piece of evidence that a near-term low may have been established. It’s still too early, however, to say that the worst is over yet for CAD/JPY.