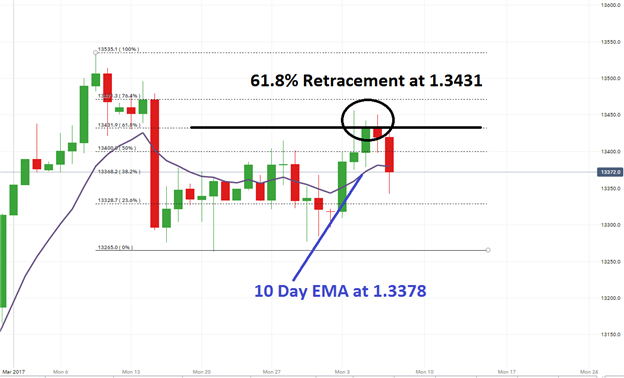 Technically the USD/CAD is again trending lower in the short term, after the pair was rejected at a line of resistance found at a 61.8% Fibonacci retracement value. This line is found at 1.3431 and will remain a point of resistance on the daily chart. With the USD/CAD trading lower today, the pair is now challenging its 10 day EMA (exponential moving average) at 1.3378. A daily close below this point should be seen as significant. If prices continue to decline below this value, traders may begin looking for longer term breakouts next week under the March 21st low of 1.3263.

Intraday analytics now has the USD/CAD trading below both its S1 and S2 pivots found at 1.3394 and 1.3370 respectively. With both of these lines convincingly broken during today’s news, the next value of support may be found at the S3 pivot at 1.3342. Prices have tested this value once so far today, but have failed to convincingly breakout below this point. In the event of a bearish breakdown in price below this point, traders may next begin to target the round 1.3300 figure, followed by the March 21st low of 1.3263.

In the event that the USD/CAD remains supported above 1.3342, traders may look for a rebound in price back towards today’s central pivot. For Friday’s trading this line is found at 1.3422. A move above the central pivot should be seen as significant, as the USD/CAD would have retraced all of this morning’s losses at that point. In this bullish scenario traders may find the next point of resistance at the R1 pivot located at 1.3444. 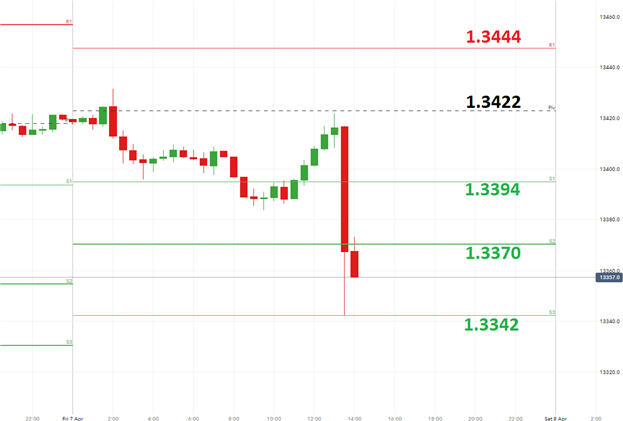