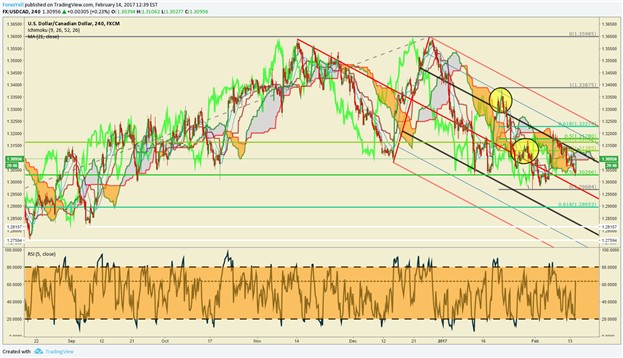 USD/CAD continues to trade in a falling channel amidst the swirling geopolitical risks surrounding the pair. On first glance, it appears that Canada could have a positive relationship under President Trump’s renegotiated trade plans, but firm details remain lacking. Either way, the Canadian Dollar trend, which is matched with the strong move higher in the commodity bloc brethren, Australian Dollar seem to be on a path of strength.

The commodities that back the Australian Dollar like precious metals and industrial metals like Iron Ore & Copper have been a bigger factor and contributor to the positive commodity story of 2017 than has the energy market that Canada relies upon. The large positive for the energy market has been the OPEC compliance as well as the stability in the price of Crude Oil above $50. Should the Oil market soon see a breakout, we could be on our way to a few weeks or months of defined Canadian Dollar strength in much the same way we’ve seen the Australian Dollar strengthen, which took over the top spot from the New Zealand dollar.

On Tuesday, Janet Yellen spoke to US Congress and did not mince words. The most memorable line was that it would be “unwise” for the Fed to wait too long before raising rates again. Upon this statement, we saw a strong move higher in the USD along with a move higher in US Treasury yields, which are positively correlated to the US Dollar. We will look to see if this move can gain traction, and if it can, it may put further pressure on the bearish structure of USD/CAD that we’ve been watching lately.

The technical structure is quite clear in that we’re in a bearish channel as shown per the Andrew’s Pitchfork and H4 Ichimoku Cloud. There is a clear resistance that we’re watching with the recent lower high, an inability to break above this level would simply communicate that the USD per the DXY is in a period of consolidation and not so much on the way to a strong recovery.

There remains a focus on what could happen to the bond market in the US and the potential for US yields to move higher. However, we continue to see from many accounts of Treasury & Corporate Bond Auctions that demand for the bond market could keep a lid on US Yields, which have been positively correlated with the direction of the US Dollar. It remains important to remember Rule #1 in correlation analysis is the correlation does not mean causation.

The simplicity of the Technical framework, despite the advanced technical tools of Ichimoku & Andrew's pitchfork being applied, is that it helps us to see the road the USD/CAD is currently traveling down and when the path may change. The two black lines within the channel help to show that we are within a rather defined downtrend, and only a move to the upper red line would align with a break above the Ichimoku cloud on the H4 chart and bring about a strong possibility of a breakout.

A move to the lower red line of Andrew’sPitchfork would help indicate a strong continuation of the downtrend that looks to have begun in early 2017. I’ll continue to favor eventual downside despite the time being consumed in seeing a breakdown.

The market does not appear to show a breadth of volatility, which does not mean that a trend is above, but rather that the time it takes the trend to reach its destination is longer than at first anticipated. The line in the sand for the bearish technical picture where we would flip from a bearish bias to a neutral bias would be on a break above 1.3212, the February 7 high. Until then, I’ll favor further downside despite the time consumed to move lower in the pair.

H4 USD/CAD Chart: Trading Well In a Falling Channel. Back To Channel Resistance