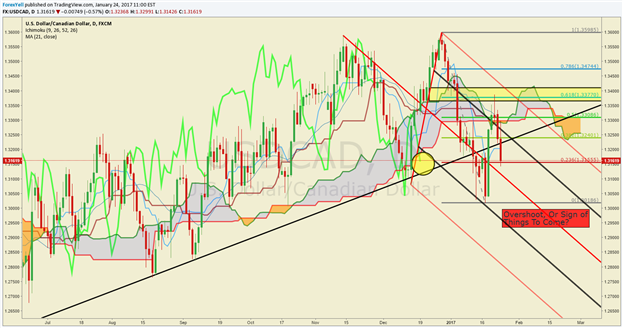 After a volatile week that briefly saw the Canadian Dollar become the weakest currency in the G8, the Loonie appears to be gaining steam again with its commodity-bloc brethren. Much of last week’s weakness was sparked with BoC governor, Stephen Poloz said that hikes remain on the table. Naturally, the stability in the price of Oil, and what looks to be a beneficial positioning for renegotiated trade agreements with the US had reduced me market’s view that such a monetary policy action was probable. It appears that Stephen Poloz was providing exporters a sigh of relief by jawboning the currency lower, which appeared to work for a while.

The last full week of January has little to offer in the way of fundamental data for Canada, and a majority of US data is split between the traditional GDP & durable goods data alongside new information about Trump’s policies coming to the forefront. Therefore, we anticipate most action in USD/CAD to be driven by USD or external factors that are important to the Canadian economy like the price of Oil and the capital flows into commoditybloc currencies.

Based on the relative strength of AUD and NZD in the second half of January, we could be seeing CAD strength regaining a foothold in G10FX.

Three key developments on the chart stand out that we’ll cover. First, the development for USD/CAD with Ichimoku Cloud applied to the chart shows a developing breakdown with momentum appearing to resume the Bearish dissent as the lagging line (yellow circle) joins price below the cloud on the Daily chart. Typically, we look at the price and the lagging line on the same side of the cloud as an indication of trend strength developing.

The last component worth keeping an eye on is the Andrew’s Pitchfork (Red lines) that appear to be framing price pivots well. The internal resistance line (black) aligned with the 50/61.8% retracement of the 2017 range and subsequently pushed price lower. If the price continues to fail at falling resistance, I will continue to favor further downside over a reversal. The bearish bias would turn neutral on a break above the 1.33/34 zone, which comprises the top of the Pitchfork, Ichimoku Cloud, 61.8% retracement and the January 20 high.