Who said the markets were not listening to Central Bankers anymore? Much attention has been placed on the new era of Fiscal Policy when Donald Trump takes the U.S.’ highest office on Friday, which has been a key narrative in the higher yields theme. Trump looks to provide his own play on Shinzo Abe’s economic reform, which were both geared towards economic growth with the market seen as a lever to be pulled and not a force to reckon. However, on Wednesday, markets were reminded that Central Banker’s words matter when Stephen Poloz noted that “rate cuts remain on the table.”

Since those words were uttered at the Bank of Canada rate announcement, the price of USD/CAD has appreciated (indicating CAD weakness) by ~2.5%. Much of the appreciation also can be attributed to the words from the other Central Banker in this currency relationship, Janet Yellen. At a speech on Wednesday, Yellen noted that her and her colleagues see a few hikes each year going forward as the Fed’s foot remains, “on the pedal.” She also, unlike most other central banker’s around the world, failed to talk down her country’s strong currency. However, this could be seen as a desire to not cause a scene for President-Elect Trump to draw attention.

Yellen and Poloz provided a double-whammy of sorts to USD/CAD shorts, where one central banker zigged as the other zagged and led to a sharp move higher off the 1.3000 level, where USD/CAD also found support late in 2016.

Thankfully, amid all the fundamental confusion, we can look to the charts for guidance. The focal point on the Daily chart for many has been the recent break below Trendline support as the USD was weakening on a pullback in yields. Thanks to Yellen’s comments above, the US Yields have moved higher again, which has helped USD, but the move higher in yields seems to undershoot the comments from the Chairwoman of the Fed.

The move higher in USD/CAD now faces a crucial test despite the strong move higher off the 1.3000 zone where the price has bounced in October, December, and now January. Keeping the Trendline break in mind, it’s worth watching how the price reacts to the top of the Bearish price channel drawn with the help of Andrew’s pitchfork, and the Fibonacci retracement levels on the move down. The first retracement of a move is anticipated to be deep, which typically is thought of as a 61.8-78.6% price retracement of the move. Such a retracement would keep the price within the Bearish channel while also acting as an aggressive shakeout of positions on the newly-formed CAD strength.

Despite favoring a rejection at the 1.3377/3474 zone, a move above this level would under the Bearish bias on USD/CAD that remains until this levels break. There is a lot to like about the USD if yields continue to move higher, but that remains a large “if.”If yields do move higher, we will anticipate another run to 1.36, where the price has failed to comfortably trade above in recent months.

Whether or not the recent break below the Trendline was an overshoot or a sign of things to come (i.e. more downside) will likely be dictated on the whether or not U.S. Yields move higher, taking the USD with it, or if CAD can regain its stronghold despite recent jawboning from Poloz. 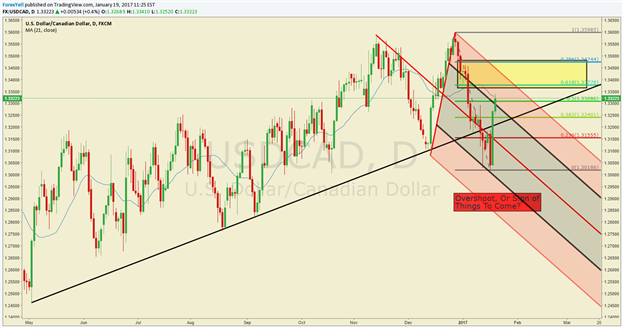