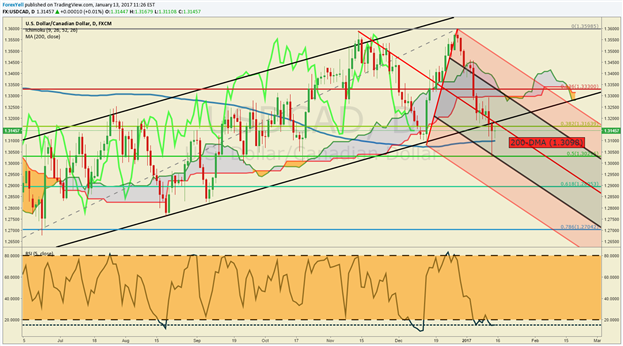 Next week brings the Bank of Canada rate announcement, which will be in focus for traders trying to discern how stern Stephen Poloz will be on Monetary Policy going forward. Much of the strength in the Canadian Dollar has been attributed to a positive shift in economic data combined with a less dovish Bank of Canada.

As the macro opening range of 2017 of 2017 finishes up, it has been highlighted by commodity FX strength vs. USD. As of Friday, we see the Australian Dollar and Canadian Dollar as the two strongest currencies in G10FX with NZD not far behind.

Commodities are seen as an inflation hedge, and the surprising weakness in USD has provided a further boost in some commodities and currencies whose Central Banks are not expected to engage in further easing. The question for most traders has become whether the USD still has more room to fall, and if commodities and the economies who do well when they appreciate could also continue to benefit well into H1 2017.

The momentum to push lower in USD/CAD is at odds with a pattern on the chart that has included a strong bounce higher from the 200-dma (1.3098) and deep retracements in the choppy move higher. While some would argue that momentum may be bottoming out, it’s equally unsure whether or not the subsequent upside momentum or retracement to the mean will be worth a countertrend trade. If the price subsequently breaks below the perceived pin-bar on Thursday, it is likely an appropriate view that the down-move could continue to extend and surprise many.

Given the current environment, we would argue that the environment of strong commodity FX, surprisingly weak USD, and the Bank of Canada meeting next week should hold off Bulls until a close above 1.3296 (Wednesday’s high & Ichimoku Cloud) surfaces. Until then, we’ll focus on a possible push through Thursday’s low of 1.3029 to target the twin lows of September and August at 1.2822 and 1.2763 respectively.