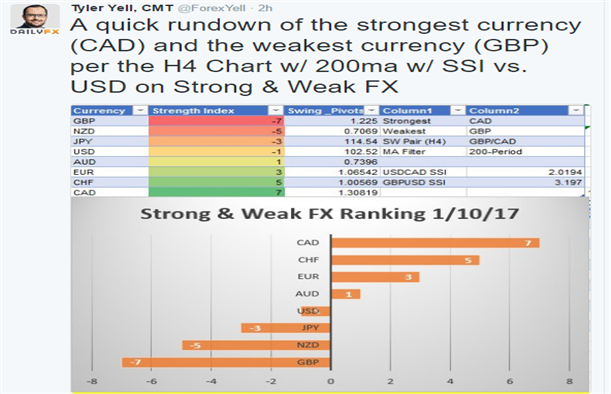 The Canadian Dollar is strengthening without much help from Crude Oil, which looks to have stretched positioning not seen since 2014. Much of the strength attributed to the Canadian Dollar has been two-fold. First, the Bank of Canada has come out since their last Rate Announcement as decidedly less dovish (relatively hawkish) than anticipated, which helps communicate that the economy would have to begin struggling more than anticipated for the Bank of Canada to change course and move to a more dovish approach.

Second, the Canadian economy is catching some tail wind from growth expectations from the United States under perceived Fiscal Stimulus from President-elect Trump who takes office on January 20 and the price of Crude Oil stabilizing near $50. The low-$60/bbl range has been a compelling Wall Street target and a move to this level would likely keep the Canadian Dollar firm across the board.

As of Tuesday, January 10, 2017, the Canadian Dollar is the strongest currency in the G10 on a relative basis thanks to the combination of the two measures above and is remaining strong against notably weaker currencies like GBP, NZD, and the Japanese Yen.

Economic data for the Canadian economy is rather light per the DailyFX Economic Calendar. Canadian Housing Starts did surpass expectations on Tuesday, but the data is seen as second-tier compared to the major themes discussed above.

Watching the chart below, we are starting to face major technical zones worth watching. First, while the Canadian Dollar is the strongest relative currency on an H4-basis, the price is consolidating above a Trendline drawn from the May low.

Given the preference of momentum continuation, until an exogenous shock displaces a very strong or weak currency, we’ll be on the watch for a move below this Trendline. Below the Trendline sites the 200-day moving average at 1.3097, which provided a strong bounce in mid-December. If the price cuts through the 200-DMA, traders would be right to keep an eye on a move to the 1.272% Fibonacci expansion of the late-December move at 1.2939. Below this soft-Fibonacci target is a confluence of Fibonacci & a prior price pivot of the August low at 1.2759, and if price breaks below there, many traders may become persuaded of a retest of the May low of 1.2460.

While momentum favors USD/CAD downside, the price is currently trading just below the base of the daily Ichimoku Cloud that has acted as flexible support in the move higher over the prior months. Additionally, from an Ichimoku perspective, the momentum or lagging line has yet to break below the cloud, which is typically one of the strongest indications of a confirmed reversal.

A break above the Ichimoku cloud near 1.3350 could indicate that the Canadian Dollars tenure as the strongest G10 currency has run its course. However, we’ll favor momentum continuation for now until proven wrong.