USD/CAD broke below 1.3300 on Wednesday morning, which puts the pair on a downward trend the start of 2017. USD strength continues to be a broader theme that many are still watching, but we have recently noted that DXY is found resistance in the medium-term while RSI(5) is showing bearish divergence that could allow other currencies like the Canadian dollar to gain ground.

Economic data for the Canadian economy is rather light per the DailyFX Economic Calendar. One of the key themes that have developed over past weeks for the Canadian dollar is a supportive Bank of Canada that looks to err on the side of hawkishness that could continue to support CAD and put further pressure on USD/CAD.

Watching the chart below, we are starting to face major moving averages worth noting. The 100-day moving average sits at 1.3256 followed by the 200-day moving average at 1.3094. While the entire move higher from the May 2016 low has been choppy, traders who bought deep dips in USD/CAD have been rewarded, albeit likely bloodied a bit too.

In addition to the major moving averages, USD/CAD is currently trading near the base of the daily Ichimoku Cloud that has acted as flexible support in the move higher over the prior months. One strong technical point worth keeping an eye on is the trend line drawn from the higher lows in the base of the channel created with the Modified Schiff pitchfork near the 78.6% retracement of the December range near 1.3200.

The market has remained above this trajectory in the entire move higher that has corrected the sharp downturn in the first half of 2016. A break below this trend line may be an explicit argument that we are about to see either surprising USD weakness, little-expected CAD strength or maybe a mixture of both in Q1 2017. 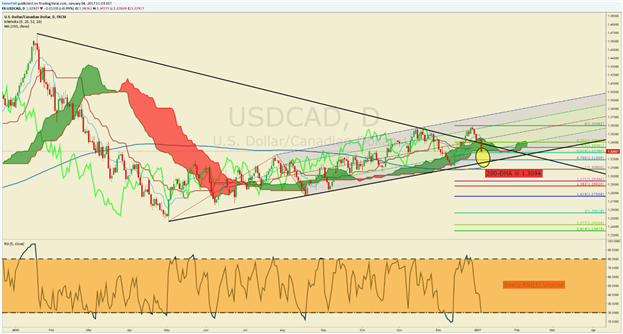