-Trendline resistance being tested as support from January high

The last week of 2016 trading has brought about USD weakness. As we come into the Macro Opening Range of 2017, traders will do well to keep an eye on a breakout above the 50% retracement of the 2016 range. The market tested the key 50% Fibo in mid-November but failed to close above it, and we’ve seen a similar occurrence in late December.

However, a close above the 50% Fibo (1.3575) in the first weeks of 2017 could usher in another strong move higher like we’ve seen in the first trading month of the year in USD/CAD in the prior couple of year.

In addition to watching the 50% retracement as resistance and validation of trend continuation, the most important component on the USD/CAD chart remains the strong bounce off of multiple levels of support all near 1.31/3075. This price zone combined the 200-day moving average at 1.3087, the 61.8% Fibonacci retracement of the August – November price range, the Ichimoku cloud base, and the combination of the Modified Schiff Pitchfork / Trendline support drawn off key pivots of the May, June, and August. The bounce came as the market digested the Federal Reserve’s actual hike and added a more hawkish Dot Plot.

Last year, we saw a similar occurrence with an initial rally followed by a small setback at the end of the year. The market when on to push USD/CAD up ~6%, although much of this move was on the back of an Oil market “crash” to the mid-$20 range.

Looking at the chart below, you can see we are now sitting at multiple levels of trend support. First, we’re trading at trendline support on a trendline drawn off the January high and mid-November high where we failed to close above the 50%-retreamcenety mentioned earlier. In addition to the TL, we’re sitting in the Fibonacci retracement zone (1.34002-1.3278) from the post-Fed rally as well as the Ichimoku Cloud top and the 21-DMA (1.3412). All of these zones would make a fine place for USD/CAD to make a strong move higher at the start of 2017.

A break below the Ichimoku Cloud & 61.8% Fibonacci Retracement of the post-Fed rally near 1.3278 would open up another possible retest of the 200-DMA where we bounced in December that is trading near 1.3093. 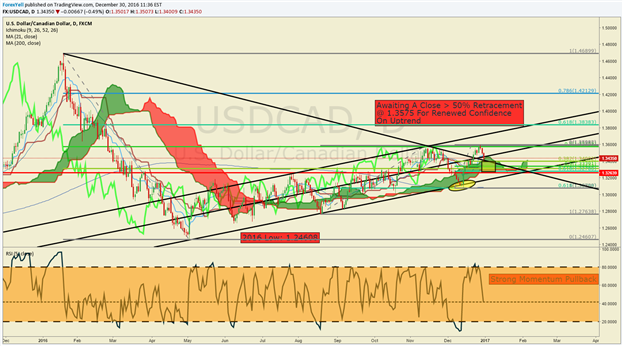