The Canadian Dollar was the darling of G10FX ahead of the December FOMC meeting. The Canadian Dollar was benefitting from the positive correlation of Crude Oil as Oil was strengthening in the wake of the OPEC accord with some non-OPEC members to cut production and bring balance to the oversupply that permeated the energy market from 2014-2016.

However, we’ve recently seen a disappointing economic data from Canada, which has aligned with the stronger USD and has had more focus than the continued rise in the price of Oil. In addition to the traditional fundamental focuses, there is concern about an increase in border tax increases and renegotiated trade contracts that will come with the new U.S. Presidential Administration in 2017.

However, the December FOMC meeting nearly brought two rate hikes to the market, which has lifted the USD and the Dollar Index to the highest levels since December 2002. The twohike view come from the actual hike that was completely priced in per the Fed Funds Futures data on Bloomberg as well the 25 bp increase in the median Dot of the FOMC Dot Plot.

Since this “two-hike” event, the price of USD/CAD has risen by over 4% and looks poised to continue higher if US data and yields continue stronger and rising. 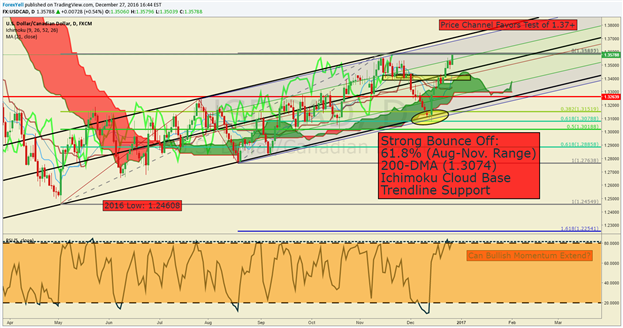 The most important component on the USD/CAD chart is the strong bounce off of multiple levels of support all near 1.31/3075. This price zone combined the 200-day moving average at 1.3087, the 61.8% Fibonacci retracement of the August – November price range, the Ichimoku cloud base, and the combination of the Modified Schiff Pitchfork / Trendline support drawn off key pivots of the May, June, and August.

Looking above, you can see we aggressively moved back in the bullish channel. We’re pushing toward the top of the channel near 1.3700, and the trend looks ready to continue into 2017 as momentum per RSI(5) on the Daily Chart is showing an early move into overbought, which could indicate we’re in the midst of a stronger move than previous uptrends.

As of this writing, we’re also near the November high before the OPEC accord announcement where CAD was weakened to the point that USD/CAD was trading at 1.3588, which is near the 50% Fibonacci retracement of the 2016 price range. The anticipated break of this level opens up the anticipated channel top and the 61.8% of the 2016 range at 1.3838.