Quick Fundamental Take: USD/CAD gapped down at the open of trading on Monday as Oil gapped higher on the belief that we’d see deeper Oil production cuts by OPEC- and select Non-OPEC members. The volatility of Oil has played a large role in USD/CAD on Monday and will likely continue to play a large role through the week as the major event risks take place on Wednesday with the Federal Reserve rate announcement with a hike completely priced in, and the uncertainty surrounding the commentary of future hikes.

Despite the fundamental backing for USD strength, which has been clearly seen in the DXY, the Canadian Dollar has continued to gain against the greenback since November with a ~500 pip range as of Monday morning that could continue to widen. However, it’s worth noting that the sharp downturn in USD/CAD in late-July and August was worth ~560 pips before reversing higher by ~850 pips.

Therefore, if we’re expected to see a resumption of the choppy move higher like we’ve seen since early May, we should be doing so within ~1X ATR(5). Late last week, CAD moved to the top of the board in terms of relative strength to other G10 currencies so betting on a reversal with such strong momentum can be a low-probability, albeit high-payoff should the reversal come to pass.

This week only provides a tier-2 data in Canada such as Manufacturing sales and existing home sales on Thursday as the focus will appropriately remain on Oil and broad USD moves. 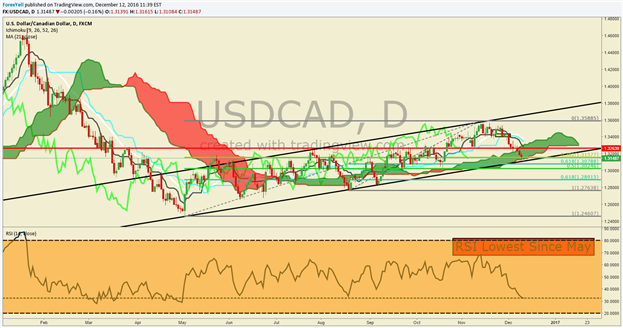 The Canadian Dollar has strengthened by ~3.75% over the last month after touching the 50% retracement of the 2016 range at 1.3575. If the broad move higher since early May was a corrective pattern to the strong drop in January-May, the 50% turn-around is a good place for a peak. We’re now watching a few components on the chart to get a fair understanding of whether or not the CAD is likely to continue strengthening.

We’ve mentioned that the burden of proof is on USD/CAD Bulls as the price remains below Shorter-term resistance like the 50-DMA and H4 Ichimoku Cloud. As mentioned above and worth repeating, we’re sitting at the long-term support of the channel trendline support and Ichimoku Cloud Base. Therefore, we’re either in a deep retracement, which could target the May-November range 50 & 61.8% Fibonacci retracement target of 1.30246 and 1.28915 respectively. Should these levels fail to hold up the price, we’d expect the price to test the August low of 1.27638 as CAD strength evolves.

We will continue to favor medium-term CAD strength against the USD and other weaker currencies as USD/CAD remains below the 9-day mid-point or Tenkan-Sen on the Daily Ichimoku chart above at 1.3286 Only a break above the Tenkan-Sen or Conversion line on a closing basis would show that Canadian Dollar Bullish momentum is slowing down.

If the price continues to work through this zone of support despite US Dollar strength vs. other G10 currencies, we could be working on more pronounced Canadian Dollar strength that will be easily recognized against weaker currencies like the JPY, EUR, and possibly the GBP.