USD/CAD Technical Analysis: With Oil Above $50, Could Loonie Liftoff?

Another worthy note is the outperformance since Sunday’s open of the neighboring countries of the United States, Mexico, and Canada. Both neighboring country’s currency seems to benefit from the uncertainty surrounding the never-dull US Presidential Election. Ahead of the Debate on Sunday night, both MXN and CAD were gaining against USD, and a similar move continued that morning after the debate.

However, of all the stories out there, few are as impressive as WTI Crude Oil looking to be making affirmative moves into a bullish breakout. Brent Oil has hit a one-year high as optimism continues to grow on a production cut. There was news on Monday morning that Putin notified markets that Russia is willing to join the OPEC effort to limit Oil supply.

The three fundamental factors of jobs, election, & oil have strengthened the Canadian Dollar across majors, and USD/CAD could soon turn lower rather aggressively.

The chart below shows the price action and Fibonacci levels in better detail. The main focus I would encourage is to watch a breakdown through key levels of support that could validate further CAD strength. The first level of focus would be the 100-DMA that sits at 1.3015. A breakdown below there would align with a breakdown of the apparent correct chart pattern that looks like a consolidation pattern known as a type of Bear Flag. 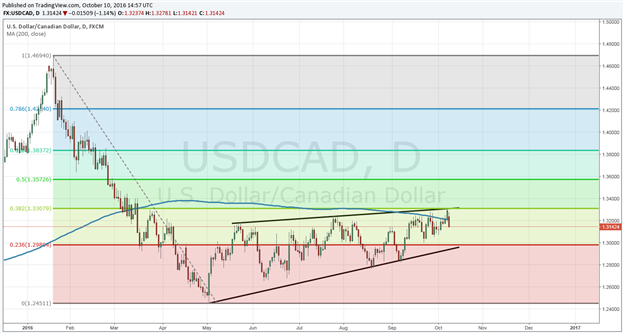 Given the weak trend higher without a break below significant support at 1.3015, I would continue to encourage watching the upside. There is still a lot of questions surrounding the US Dollar. A breakout higher either induced by the Federal Reserve of a macro factor causing USD Strength in a haven flow move could make USD/CAD a great candidate for a stop and reverse. Possible targets in such a scenario could be another Fibonacci Retracement level higher such as 1.3572, the 50% retracement of the January-May range or possible the 1.38272 61.8% retracement if Oil were to reverse aggressively lower.

Much like Crude Oil, the Canadian dollar is beginning to have fundamental factors backing its strength. Traders should be on the watch for these factors growing that could breed a self-fulling fundamental trend backed by the charts that could show CAD is starting to look attractive. Those traders not wanting to sell USD may also want to consider other weaker currencies to sell against the CAD such as GBP, NZD, or the Japanese Yen as of early October.