The weak Canadian data does not appear to be slowing down. On Wednesday, we saw 2Q annualized GDP drop as exports weighed heavily on growth. Friday will provide trade data that may help with short-term direction. However, the weakness in exports that was a boon as the Energy Industry took a hit with lower oil prices as well as the aftermath of the Alberta wildfires does cool down optimism on a Canadian Economic recovery in the short-term. However, continue to keep an eye on the Fiscal Stimulus that continues to work through the system to help aid the economy through the Oil market weakness.

There is a positive correlation to good US Data and a healthier Canadian economy as the United States is the #1 export destination for Canada’s increasingly important export sector of their economy. One factor that hasn’t helped the Canadian Dollar is the recent ~11% drop in the price of WTI Crude Oil.

Interested In Learning the Traits of Successful Traders? If So,Click Here

The chart above is showing the overall sideways price action since May. You can see a clear support and resistance that has taken place with the black channel lines. The Andrew’s Pitchfork (Bearish is Red, Bullish is Blue) is more tightly framing price and helps you to see where the directional path of least resistance is until price breaks out of the channel counter to the direction of the median line.

The price is currently trading above resistance of the Bullish ST Andrew’s Pitchfork, which does validate the ST bullish environment, but also favors waiting for better prices to buy if that is your bias. In short, dips should be seen as bullish opportunities. However, we are also moving to the top of a multi-month range, and if that range holds, we could see a return to the lower channel line near ~1.28.

The highlighted zone on the chart above is ~1.3000. A break below that zone could be an indication of a move toward the lower channel and the fundamental kick-off for such an event would either be supportive trade data in Canada or a very weak NFP in the United States on Friday.

A strong NFP on Friday (greater than 180K) would turn focus to the price resistance of 1.3146 (August 31 high) followed by 1.3199, which is the August 5 high. Given that we’re moving toward the top of a potential range (or be on the cusp of a breakout if USD strength continues), any long position may need to have trailing stops applied.

Given the recent price action higher, the price resistance I was watching at 1.3008 broke, and will now act as short-term support. If the price of USD/CAD can hold above 1.3008, we could easily see a medium-term base form as the price naturally moves higher.

It appears now that focus should remain higher if we stay above 1.3008. It’s worth noting that a break above 1.3253 would take us above the H2 2016 high that could present a catalyst as many stop positions will likely be taken out and the upside will face much less resistance. 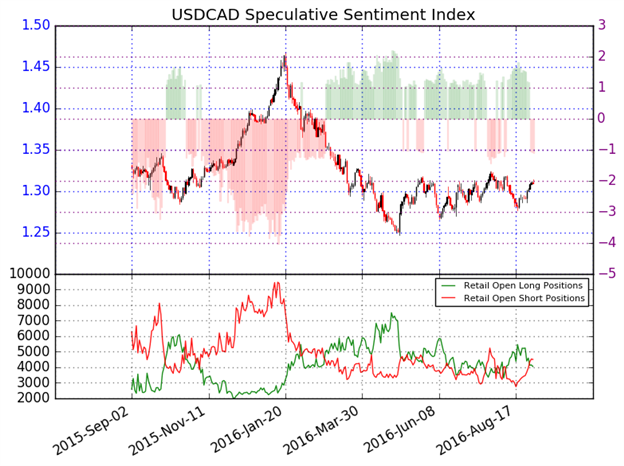 Combining the technical picture above, with the sentiment picture, and the Intermarket analysis, there is emerging evidence for a possible push higher in USD/CAD toward 1.3300.

We use our SSI as a contrarian indicator to price action, and the fact that the majority of traders are short gives a signal that the USDCAD may continue higher. The trading crowd has grown further net-short from yesterday but unchanged since last week. The combination of current sentiment and recent changes gives a further bullish trading bias.