The weakness of fundamental data in Canada has steadily underperformed economists expectations since late April as shown via the Economic Surprise Index for Canada. The Citi Economic Surprise Index for the Canadian Economy recently showed its worst reading, meaning consistent underperformance, since January when the price of USD/CAD was in the mid-1.4000s. Much of the recent Canadian Dollar stability has had more to do with the subdued US Dollar more so than Canadian Dollar strength.

The price of the Canadian Dollar vs. the US Dollar will likely be volatile heading into the end of the year. While the correlation has been weaker than historical averages, a price breakout in the Crude Oil market would support the Canadian Dollar or a persistently dovish Fed about market expectations could continue to drag the down USD/CAD.

The chart above is a good explanation on the difference between a price and time correction. The move from late January to early May was a classic and strong price correction. In shortorder, the price of USD/CAD dropped ~15% in a bit more than four months, which many felt was a long-overdue move given the recent rally and other attributed more to the strong move higher in Oil.

However, since May, we’ve seen the price of USD/CAD move sideways. What catches my attention is that such a sideways move or consolidation tends to be a sign that the prior move / trend, which was lower is not down. If that’s the case, we should identify points that would help validate a strong down move as well as resistance that if broken, would invalidate a short-term focus on the downside.

Regarding support to break, I would like to see a break below the August low before getting excited that the late-January to early-May trend could resume lower. The August low at 1.2762 would likely only break on a strong market shift in the US Dollar or a return to economic resilience in the Canadian Economy that may or may not be helped with a move higher in the price of Crude Oil.

Given the sideways price action, the price brackets I am watching is 1.3008 and 1.2762. A break of either would turn my medium-term outlook toward the direction of the break. 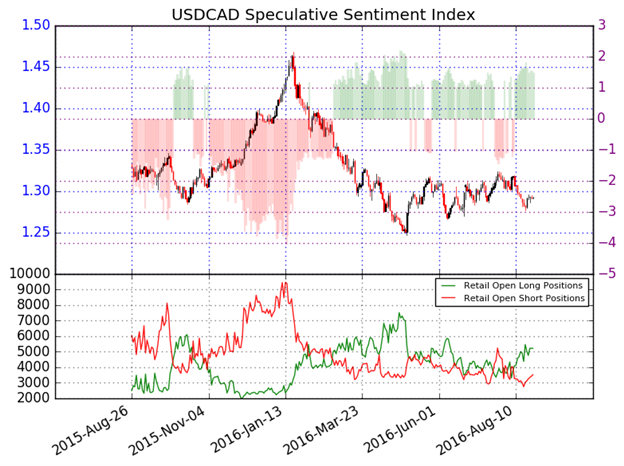 Combining the technical picture above, with the sentiment picture, and the Intermarket analysis, there continues to be evidence for a possible breakdown if USD/CAD can break below 1.2762.

We use our SSI as a contrarian indicator to price action, and the fact that the majority of traders are long gives asignal that the USDCAD may continue lower. The trading crowd has grown less net-long from yesterday and last week. The combination of current sentiment and recent changes gives a further mixed trading bias.