The second Half Macro-Opening Range is coming to a close, and the Canadian Dollar put up a respectable fight. However, after the Bank of Canada announced a rate hold, and depressed expectations for rate cuts later this year, the US Dollar has still failed to weaken as many had expected. Part of this is due to stronger than expected US Economic data that has caused markets to pull forward rate hike expectations. Either way, US Dollar stability and Canadian Dollar’s inability to capture strong gains against the US Dollar may set up an environment that looks ripe for a breakout.

A key development worth watching as Q3 and H2 2016 get under way is the directional bias in WTI Crude Oil (CFD: USOil). So far, Oil looks to have found strong resistance near ~$49/bbl at a time when the US Dollar is showing resilience. If the US Dollar can start to lift higher as the price of WTI Crude Oil begins to fall, we could see the resurgence of the trend that took USD/CAD from ~0.94 in 2011 up to 1.4688 in January providing a ~52% rise.

USD/CAD Is Holding Above Support, Watching For a Breakout If Trendline Holds

USD/CAD looks to be setting up for a breakout from a period of consolidation as the US Dollar’s strength may resume if it can break its respective resistance of ~12,050. In such a case, we’d expect to see an aggressive move higher toward the 38.2-61.8% Fibonacci Retracement of the January 20-May 3 Range, which could push USD/CAD up to ~1.3311-1.3837 respectively.

However, before we can break into that zone, we should look at the resistance that USD/CAD is currently respecting. First, we have seen an original high a few weeks after the May low at 1.3187 that has yet to break over nearly two months later. In the subsequent trading days from the late May high, we’ve found resistance a bit lower in the ~1.3120 zone. If you are looking for an easy to locate resistance, you can utilize the price range of May 24 between ~1.3190/3090.

For now, 1.2650 is key support. However, we do have a trend line drawn off the closing lows from early May to mid-July that has also supported price rather well. Given the macro backdrop, until that level is broken, either consolidation or waiting for a breakout higher will remain in focus.

Tighter levels of support can be found at the Weekly S1 at 1.2880 and the 61.8% of the Thursday-Monday range post-Brexit at 1.2845. However, these levels are likely more beneficial for shorter-term traders that are looking for shorter-term levels for intraday opportunities.

When looking at sentiment, crowd positioning has begun to favor further downside. For those familiar with our model, USD/CAD provided one of the strongest signals for downtrend continuation from late February to May. We use our Speculative Sentiment Index as a contrarian indicator to price action.

We use our SSI as a contrarian indicator to price action, and the fact that the majority of traders are long gives a signal that the USDCAD may continue lower. The trading crowd has grown further net-long from yesterday and last week. The combination of current sentiment and recent changes gives a further bearish trading bias. 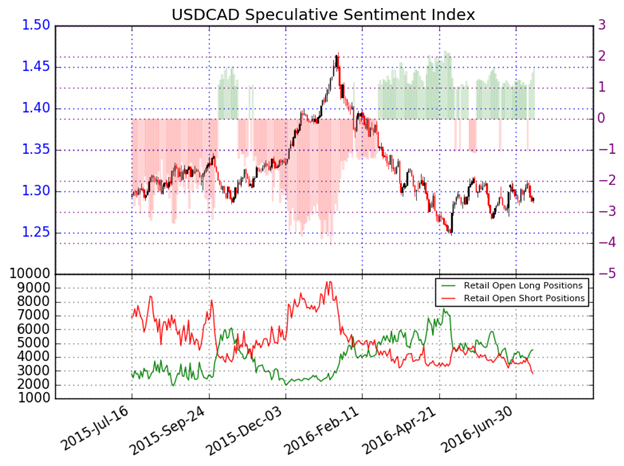 Combining the technical picture above, with the sentiment picture, and the Intermarket analysis, there continues to be evidence for a possible breakout if USD/CAD can surmount 1.3090.