USD/CAD Technical Analysis: Can The USD Bring USD/CAD Above The 100-DMA?

After the confusion surrounding the Brexit vote dissipated, many commodity currencies and emerging market currencies rallied. Except for the Canadian Dollar. To find out why Canada isn’t getting the commodity bump, one can look to the exposure Canada exports have to the UK relative to their commodity counterparts.

Information from Bloomberg shows that the United Kingdom is the third largest exporter whereas the United Kingdom is the 11th largest export destination for Australia, which has rallied sharply after Monday morning’s low. Therefore, the commodity rally, which has included industrial and precious metals, as well as Emerging Markets and DM Equities.

In addition to the negative effect of a weakening U.K. Economy on the Canadian Current Account, it’s worth asking the question, “What is next for the U.S. Dollar?” For now, there appears to be a binary view of where the US Dollar is heading over H2 2016. While there is definitely a view that the US Dollar is a haven currency that could cause it to strengthen.

However, there is also uncertainty about the future path of interest rates in the United States. Much of strength of the US Dollar since 2012 has been surrounding the fear of missing a stronger dollar that is propelled by rate hikes. The subsequent weakness, although we’re 28.5% off the low in 2011, in the US Dollar has come when investors are told that the rate hikes they were warned about do not show up or are pushed out further than expected.

Whether or not we see rate hikes remain on the table, which would strengthen the US Dollar or a pushing further out of rate hike expectations that would likely weaken the US Dollar is yet to be seen.

USD/CAD Is Pushing Against Resistance, Watching For a Breakout

USD/CAD looks to be in a period of consolidation unless the US Dollar’s strength of Friday & Monday can resume. In such a case, we’d expect to see an aggressive move higher toward the 38.2-61.8% Fibonacci Retracement of the January 20-May 3 Range, which could push USD/CAD up to ~1.3311-1.3837.

However, before we can break into that zone, we should look at the resistance that USD/CAD is currently respecting. First, we have seen an original high a few weeks after the May low at 1.3187 that has yet to break over a month later. In the subsequent 25+ days, we’ve found resistance a bit lower in the ~1.3120 zone.

Therefore, if USD/CAD will resume a Bull-Run, a break above 1.3187 will be the first indication that we could be on our way to multi-100 pip rally. After the trading 1.3187 in late May, the price has found support a few hundred pips lower around ~1.2650. For now, 1.2650 is key support, and until that level is broken, either consolidation or waiting for a breakout higher will remain in focus.

Tighter levels of support can be found at the Weekly Pivot at 1.2920 and the 61.8% of the Thursday-Monday range post-Brexit at 1.2845. However, these levels are likely more beneficial for shorter-term that are looking for shorter-term levels for intraday opportunities.

When looking at sentiment, crowd positioning has begun to favor further downside. For those familiar with our model, USD/CAD provided one of the strongest signals for downtrend continuation from late February to May. We use our Speculative Sentiment Index as a contrarian indicator to price action. As of Midday-Wednesday, the ratio of long to short positions in the USDCAD stands at 1.16, as 54% of traders are long. 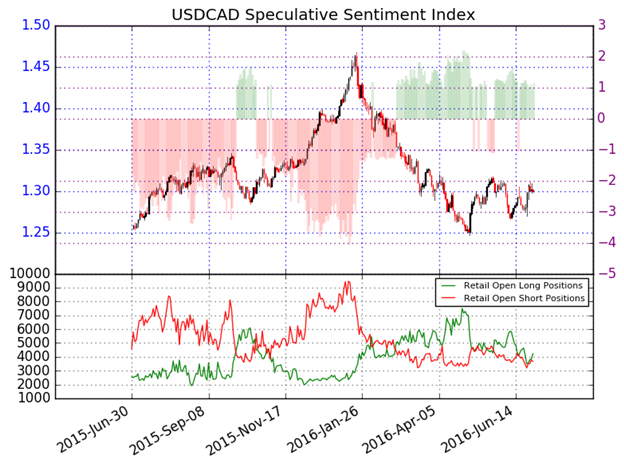 Combining the technical picture above, with the sentiment picture, and the Intermarket analysis, there continues to be evidence for a possible breakout if USD/CAD can surmount 1.3150.