Wednesday saw a strong break higher in WTI Crude Oil (CFD: US Oil), and USD/CAD dropped following suit of the historical correlation of Oil & Canadian Dollar Strength. Inventory data surprised investors as the EIA reported that there was a draw of North American inventories to the tune of ~3mn/bbl when a build, showing a lack of demand and oversupply expectation of 2.5mn/bbl.

In addition to the inventory shock, US Dollar long traders also appear to be getting washed out in Wednesday’s session as traders doubt the validity of any rate hikes in 2016. As of Wednesday, the market was only pricing in a 4% probability of a Fed Rate Hike per Fed Funds Future via Bloomberg. For now, there are no FOMC meetings where a rate hike is priced in by the Fed for 2016. A failure for the Fed to produce a rate hike at the same time Oil remains in an uptrend could further spur the USD/CAD downtrend.

Even with the above information, it appears now that USD/CAD is in a state of flux. You will see below that our proprietary Sentiment System shows a nearly flat market. Therefore, the potential for a breakdown or breakout from a positioning standpoint seems equally likely. However, a break above 1.3015 could entice mean reversion traders to jump in and try to chase and push USD/CAD toward 1.3250.

The longer-term chart above shows a channel drawn from key pivots in USD/CAD in 2007, 2008, and 2011. The channel did a great job catching the January high, but a sliding parallel (trend line drawn off the median line slope), shows a polarity level on the chart that has acted as resistance and support over the years. The recent high of 1.3015 also aligns with the sliding parallel, and if this level holds as resistance, we could see a strong move down to the median line near ~1.2200.

Regarding resistance, the 1.3015 level appears critical. Last time, we warned of a bullish falling wedge breaking out toward the start of the wedge near 1.3250. If the price can break above the recent weekly high of 1.3015, we could soon see a strong break toward ~1.3250 that also aligns with the 38.2% Fibonacci Retracement of the January 20 to early May Range.

As of Mid-Day Wednesday, the LoD is near the 34-DMA, which has been solid resistance and currently sits at 1.2850. Should the 34-DMA fail to hold up the price once again and start acting like resistance once again, we could see the downtrend regain its steam, albeit likely with a flatter slope. Beyond the level of the 34-DMA, the Weekly Pivot at 1.2705 also aligns with a recent corrective retracement before a push higher. A break below there would turn my attention prior lows near 1.2450 and lower.

When looking at sentiment, crowd positioning has returned to favor the downtrend. For those familiar with our model, this favors a return toward the mid-1.20s. We use our Speculative Sentiment Index as a contrarian indicator to price action, and the fact that the majority of traders are near net-flat at a bull: bear of 1.12 as 53% of traders are long.

Short positions are 8.4% lower than yesterday and 8.4% below levels seen last week. We use our SSI as a contrarian indicator to price action, and the fact that the majority of traders are long gives a signal that the USDCAD may continue lower. The trading crowd has flipped from net-short to net-long from yesterday and last week. The combination of current sentiment and recent changes gives a further bearish trading bias.

USD/CAD Speculative Sentiment Index as of Wednesday, May 11, 2016 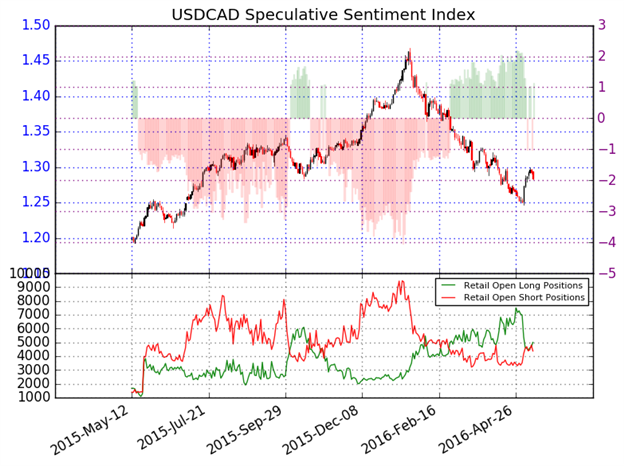