The Bank of Canada seemed to have one key point at today’s Bank of Canada announcement, Fiscal Stimulus works. Fiscal Stimulus is synonymous with Government spending in a strategic manner. Given the economic pain from the year-over-year decline in Oil prices, Fiscal Stimulus from PM Justin Trudeau was key in the Bank of Canada holding in January, which put the Canadian Dollar on a rise not seen since 2009, when Oil bottomed before tripling in price and lifting the Canadian Dollar over the next three years. Impressively, the bank said that energy investments will plunge by 60 percent this year from where it was in 2014.

The admitted risk on the horizon per the BoC has stemmed from a stronger Canadian Dollar alongside weaker global growth than expected, but they felt comfortable with rates around 0.5%. Poloz noted that the positive elements in the economy were edging out the negative influences adding that the elements of a recovery are in place.

Even though we hit levels not seen since last Summer, the theme of today’s price action will likely be one of consolidation. The price of USD/CAD has spent a majority of the week trading around the weekly S2 pivot level, which unsurprisingly denotes a strong downtrend. The Weekly S1Pivot level is around 1.2885, and would make for an appropriate level of soft resistance. For now, the strength of the move lower, totaling now around 0.1947 pips given today’s low of 1.2742 to the January top of 1.4689, requires a more significance resistance level. Given the drop off from the 1.3200 level earlier this month, that level would need to be broken on a daily close to favor a more significant retracement.

Regarding support, today’s aggressive move in the morning brought USD/CAD to the key support zone of the 38.2% Fibonacci Retracement level of the 2012-2016 range at 1.2757. Below today’s low, technical focus turns to the June 1 high of 1.2563, followed by the June 18 low of 1.2134. While CAD did weaken during BOC presser today causing a consolidation of the recent sell-off, the longer-term trend would favor a move towards the June 1 & 18 extremes as downside targets.

On the chart below, you can see a 9-year pitchfork that has framed price action well. While price could rip below the median line, which sits at 1.2500, that is an appropriate target for the time being on further US Dollar weakness and CAD strength.

When looking at sentiment, crowd positioning has continued to fight the trend aggressively providing a favor for more downside. We use our Speculative Sentiment Index as a contrarian indicator to price action, and the fact that the majority of traders are net-long at a bull: bear of 1.827 as 65% of traders are long means that a bearish USD/CAD signal is currently at play. This signal has been working itself out since late January. Now that the price has broken below the October low and the long-term 38.2% retracement level, we’ll continue to favor trend continuation toward the June 1 high. A break below these new key support metrics and a move further into positive territory on the SSI would favor further downside towards downside targets mentioned above. 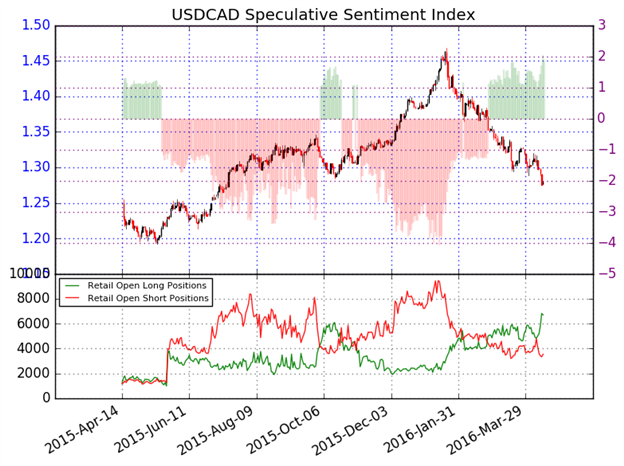