The Canadian Dollar historically has been seen as a derivative of Oil. This view is in part due to the seeming free-fall CAD was in vs. USD, when Oil was making its descent down to $~26/bbl in February. However, a heads-up from Steven Poloz of the BoC on January 20 seemingly changes all that.

On January 20, the Bank of Canada announced that the overnight rate would remain at 0.5 percent despite the volatility in the countries focal point commodity of WTI Crude Oil. In an aura of prophecy, they noted that the burst of infrastructure spending and a global recovery (then shaky, but now on more solid footing) would reduce the need to weaken the Canadian Dollar with further monetary easing.

Since then, USD/CAD has fallen by over 12% or ~1,800 pips, and now forces are supporting the Canadian Dollar. On Tuesday, Janet Yellen emphasized that the Federal Reserve would not shock the market by raising interest rates too fast, and would prefer to raise slower than anticipated in a gradual fashion.

Now, the two components that support the elevator rise to 1.4688 on January 20 of the Canadian Economy in seeming freefall while the US economy would soon be supporting multiple rate hikes is reversing. Along with that, reversal of public perception has been the reversal of the trend in USD/CAD.

Given the abrupt chance in trend in late January, there has been little reason to bet against the Canadian Dollar. Since breaking below the 200-DMA, currently near 1.3350, that sentiment remains. Lower-highs continue to print, and US Dollar weakness has become the dominant G10 theme on disappointing Fed Rhetoric despite economic steadiness.

When looking at sentiment, crowd sentiment has moved positive providing favor for more downside, and this trend appears to be accelerating. We use our Speculative Sentiment Index as a contrarian indicator to price action, and the fact that the majority of traders are net-long at a bull: bear of 1.47 as 60% of traders are long means that a bearish USD/CAD signal is currently at play. This signal has been working itself out since late January. Now that the price has broken well-below the 200-dma, we are now staring at the October low. A break below this new key support metric and a move further into positive territory on the SSI would favor further downside towards downside targets mentioned above. 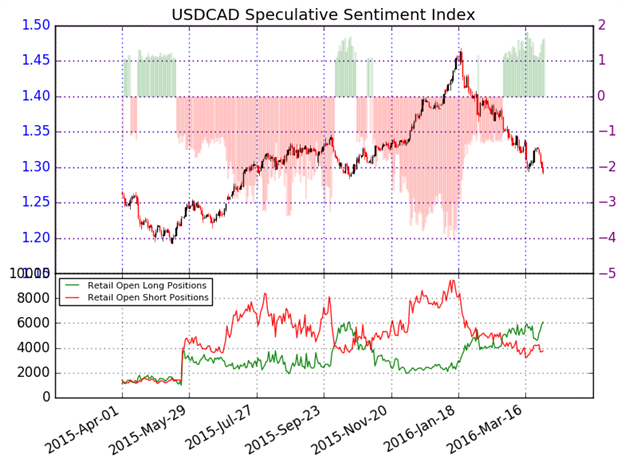