Canadian Dollar Has the Wind at Its Back

The Canadian Dollar is having its best run in term of pips gained against the US Dollar since 2011/2012. Now, the question becomes whether or not the positively correlated WTI Crude Oil continues to push higher and closer to 2016 highs will propel the Canadian Dollar higher. On March 09, the Bank of Canada will meet and let the market know if they are going to stop the Canadian Dollar’s Bull Run or encourage it further. For now, it is fair to say that if Oil continues its path higher and the Bank of Canada does not talk the CAD lower, we could see USD/CAD pressing below 1.3000. To see our long-term Oil Outlook, check it out here.

The title of ‘Bounce Now or Forever Hold Your Peace,’ is due to the multiple forms of support that we’re sitting at on the chart.

You can see that we have also retraced roughly 50% of the May-January range. Now, a move below support near 1.3280, the 200-dma, signals a move toward the 61.8% of the range above is slightly under 1.3000 at 1.2977. This move may also find support at the 2009 former range highs. These levels are giving way further validate the behavior change that we have been warning traders of happening.

Short-term resistance on USD/CAD aligns with 1.3500, which is the March 7, 2016, weekly R1 Pivot. Beyond 1.3500, resistance moves toward the 1.3650 zone, which was support throughout February before the recent low gave way, and is also the Weekly R2 Pivot. If the price stays below these key levels, the Canadian Dollar rebound could align aggressively with risk and oil.

When looking at sentiment, crowd sentiment has moved positive providing favor for more downside. We use our Speculative Sentiment Index as a contrarian indicator to price action, and the fact that the majority of traders are net-long at a bull: bear 1.40 means a bearish USD/CAD signal is currently at play. Now that the price has broken below the 100-dma, we are forced to stare at the 200-dma. A break below this new key support metric and a move further into positive territory on the SSI would favor further downside towards downside targets mentioned above.

USD/CAD Speculative Sentiment Index as of 3/7/2016 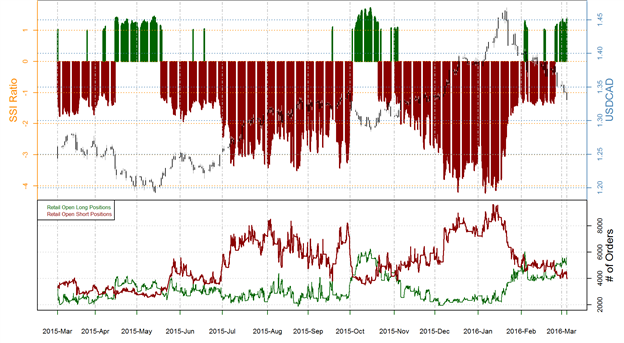