Why USD/CAD Direction Is Uncertain?

The Canadian Dollar has been a volatile currency across the board. Now, USD/CAD implied volatility over 1-month has reached the highest levels since November 2011. This expected volatility means uncertainty is high even with Oil breaking below the January 20 lows.

Now the focus turns to what is driving the Canadian Dollar across the board as well as against the US Dollar. The US Dollar has been hard hit, and the ~ 1,000-pip fall in USD/CAD could turn the attention of the Bank of Canada back toward potential easing policy. Such a move would likely be due to a stronger relative Canadian Dollar, which hurts exports; alongside weak Oil that continues to put pressure on the energy portion of the economy will likely pressure economic growth.

Now that USD/CAD has recently taken out the 2016 opening range lows, there is a view that more downside could be on the way. However, you can see on the chart above that we have entered a key range of support going back to May. Until support, which aligns nicely with the 100-dma has broken, it is hard to see selling USD/CAD as a high probability trade.

To see how FXCM traders are positioned after such a big move, click here.

Considering that, USD/CAD sits in the middle of a wide long-term range between 1.3600-1.4325, the next zone of resistance of 1.4101 remains in focus. An inability to take out that opening range high of February would turn attention back to the bottom of the range with the February 5 low at 1.3710 and the Feb 4 low at 1.3638 of keen interest.

If USD/CAD is not supported by the 100-DMA at 1.3568, a broader view of US Dollar downside would be favored. However, returning to the first level of focus higher at 1.4101, if that level is taken out the next levels of resistance is the 21-DMA at 1.4139 followed by the late January corrective high of 1.4324.

Canadian Dollar Rally is set to Last per Sentiment

When looking at sentiment, crowd sentiment has moved back to a bearish bias relative to recent positioning. We use our Speculative Sentiment Index as a contrarian indicator to price action, and the fact that the majority of traders are selling again provides a contrarian signal that the USDCAD may continue higher. A push further into negative ratio territory on client positioning would favor further upside towards resistance mentioned above.

Combining the technical picture above, with the sentiment picture, a hold of support would further support the bullish argument. However, a break below support of the long-term channel and 100-DMA alongside a flip in retail sentiment from net short against the trend to net long against a potential new trend would further warn of more CAD gains ahead. 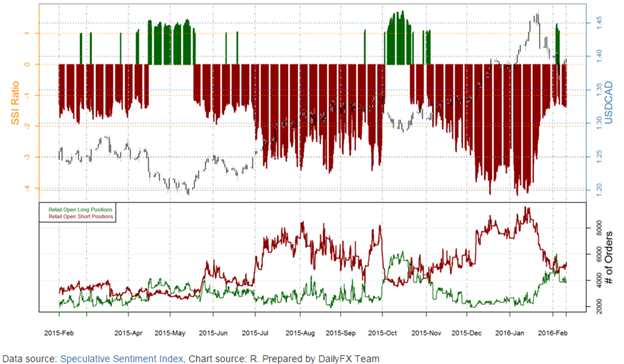