The Canadian Dollar remains well atop a strength index of G10 Currencies in a sudden two-week shift of fortunes in the FX market. Two weeks ago, the Canadian Dollar was falling through the floor of chart price support, while everyone was in awe of US Dollar Strength. How quickly the fortunes can change in FX.

Now, CAD has been rallying after reversing its longest losing streak since 1971, and traders are understandably wondering if more CAD strength is ahead. USD/CAD has taken out the 2016 Opening Range low, which is a good sign that the high set on January 20 may be the high price for the year or at least for the next few months. However, this type of second-month reversal has been common for USDCAD in the last few years.

While market forces and unwinds will continue to drive USDCAD in the short-term, traders should remain aware of the Friday’s job report in America and Canada that could affect risk-appetite and divert focus on short-term risk sentiment. However, the ‘Blame it on Crude’ environment seems to be fading for now.

To see how FXCM traders are positioned after such a big move, click here.

The focal point on the chart now is long-term trendline and Fibonacci support. First, given the sharp ~1100 pip reversal, support looks to be at the price zone of 1.3550/3650. A strong turn off these levels higher should turn attention back to the opening range low of 2016 that sits at 1.3811. Beyond Opening Range low as resistance, the weekly pivot point and price high would be worth focusing on at 1.4101.

Either way, you look at the chart; the burden of proof is on the USD/CAD Bulls. A break above the resistance levels mentioned would be the first signs of evidence that they have a rightful claim. However, unwinds often defy expectations, and if price breaks through key support of the 1.3550/3650 zone, we may have entered a longer-term sell the rally environment.

Canadian Dollar Rally is set to Last per Sentiment

When looking at sentiment, Crowd Sentiment Extremes Have Flipped on USD/CAD relative to recent positioning, which shows that retail traders likely now see USD/CAD as oversold. On the sentiment chart below, you will also notice that there has been a changing of guards as to the number of USD/CAD buyers. We use our Speculative Sentiment Index as a contrarian indicator to price action, and the fact that the majority of traders are now long provides a contrarian signal that the USDCAD may continue lower. However, a flip into negative territory again would warn of a larger trend resumption higher.

Combining the technical picture above, with the sentiment picture, a break below newly defined support of the long-term channel and Fibonacci support, alongside a flip in retail sentiment from net short against the trend to net long against a potential new trend would further warn of more CAD gains ahead.

USD/CAD Speculative Sentiment Index as of 2/4/2016 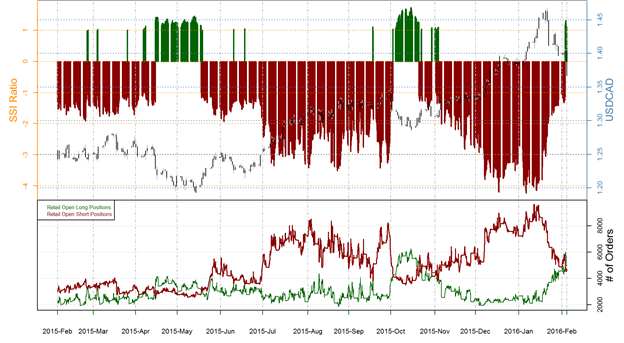