The Canadian Dollar currently sits atop a strength index of G10 Currencies in a sudden two-week shift of fortunes in the FX market. Two weeks ago, the Canadian Dollar was falling through the floor of chart price support alongside WTI Crude Oil. Now, CAD has been rallying after reversing its longest losing streak since 1971, and traders are understandably wondering if more CAD strength is ahead.

Market forces will continue to drive USDCAD in the short-term, but traders should remain cognizant of the Friday’s job report that could affect risk-appetite and overt focus on Oil’s next move. However, the ‘Blame it on Crude’ environment seems to be fading for now.

For one, the lack of dovishness from the BoC to cut rates further has lessened the spread between the US/CA 2 years Government yield spread, which widened as the price of USD/CAD moved higher. Second, markets have been re-adjusting to the risk-reversal since the January 20 low in multiple markets (stocks, commodities, and many currencies), which seems to align CAD with risk sentiment as well. Therefore, if risk-off resumes and equities drop, USDCAD could start breaking higher, however, the CAD bears may have started hibernating now that the BoC is not in a hurry to cut rates.

The focal point on the chart now is a bracket. First, given the sharp ~750+ pip reversal, support looks to be at the 2016 YTD low at 1.3811 and the 3-month channel support/ trendline off the lows, as well as the 55-DMA & 50% retracement of the October-January range near 1.3760/1.3830. A strong turn off these levels higher should turn attention back to the upper-half of the channel, which would favor a move back above 1.4500.

Resistance now looks to be at the lower high of 1.4325 where CAD Bulls recent reclaimed their bragging rights. A break back above 1.4325 would open up the view that the channel is holding, and price may likely resume higher. In addition, while the relationship has broken down a bit recently, a sustained move lower in WTI Crude Oil below $30bbl again would also turn the focus toward medium-term resistance on USD/CAD.

Combining the technical picture above, with the sentiment picture, a break below key support of the YTD low of 1.3811, alongside a flip in retail sentiment from net short against the trend to net long against a potential new trend would further warn of more CAD gains ahead. Ironically, such an event might wake up both Poloz & the CAD bears.

USD/CAD Speculative Sentiment Index as of 2/2/2016 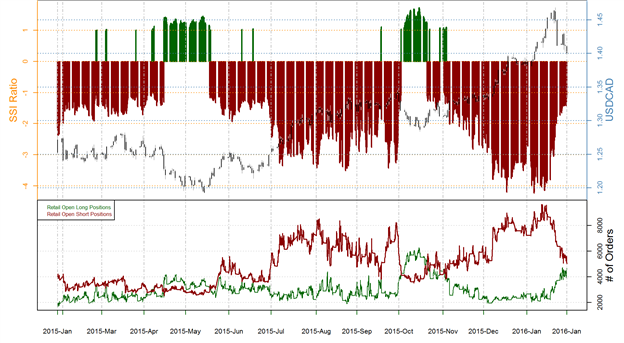