The Story in USDCAD – Underlying Markets May Be Turning

Friday’s close below 1.4150, near the 21-dma, has forced many USD/CAD bulls out of their positions. A near 550 pip drop from Wednesday’s high have traders on high-alert for a turn as many now turn neutral in the short term. The highly correlated WTI Crude Oil market posted its strongest 2-day rally since the initial move off the late 2008-low at $32.40bb to end last week rising over 18%. Now, the risk for USD/CAD traders is for a deeper-than-initially anticipated downturn that could cut into the rally that started on October 15 at 1.28311. Overall, the bullish view on USD-CAD would be encouraged should signs of a base form around the 21-DMA at 1.4170 to re-enter a long position. A continuation of last week’s move taking us through the 21-DMA would invalidate the upside views for the now.

This week, traders will look to Federal Reserve for confidence in Monetary Policy path and direction in the US Dollar after the Bank of Canada tempered expectations for easing. The view commonly held right now by many is that a confident Fed is Bullish USD and, therefore, bullish USDCAD. A statement that would not the Fed is no longer looking to hike rates in 2016, which isn’t expected, would be a dovish outcome and particularly US Dollar negative that would likely take USDCAD below the 21-DMA.

The focal point on the chart is currently at the 21-dma at 1.4169. Below the 21-DMA, two levels should be in focus for short-term traders selling USD/CAD or longer-term bulls look for levels to hold for bullish sentiment to remain. First, the 2016 YTD low at 1.3811 and second, the 7-month channel support and trendline off the lows, as well as the 100-DMA & 61.8% retracement of the October-January range near 1.3450/1.3564. A strong turn off these levels higher should turn attention to WTI Crude Oil, which has been inversely correlated with USD/CAD. A sustained move higher in WTI Crude Oil would turn the focus toward medium-term support on USD/CAD. 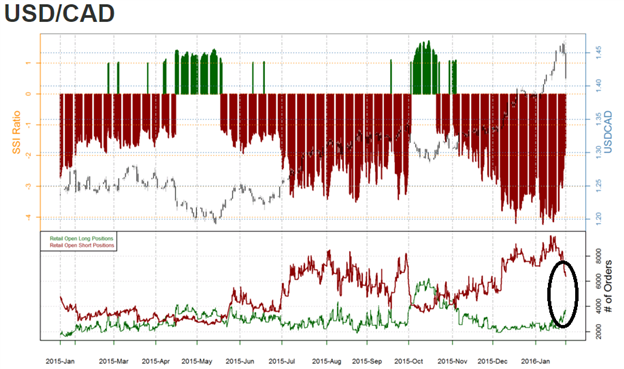