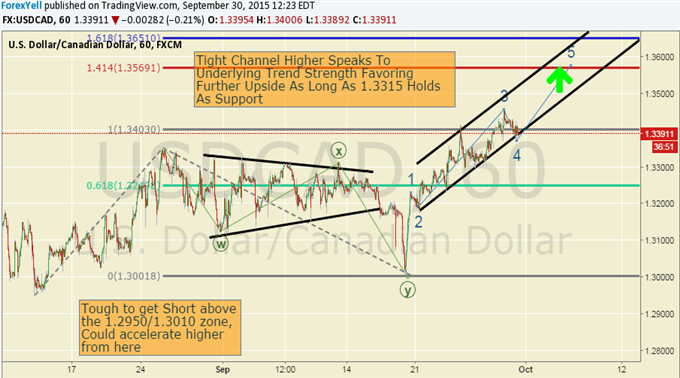 Major resistance points to the upside being hit warning that Canadian strength could appear soon however, the level at 1.3465 is still higher favoring upside for now. When combined with analysis on USDollar, it is important to watch how the dollar index reacts to the March 13, 2015 high. If resistance is respected on both USDCAD and USDollar then a retest of the recent low around 1.3010/1.2950 zone is likely ahead. Additionally, a break below these levels could indicate a larger top has been put in on the late September move.

Short-term support currently sits at 1.3315. This level marks the end of a sideways consolidation on short-term charts before the most recent blast higher to 11-year highs and therefore can act as a technical ‘line in sand’ for us to build a bias upon. Should that level hold, recent resistance at 1.3465 (61.8% Fibonacci resistance of the 2002 – 2007 range) may be under threat in a break there would open up 1.36-1.38 zone. For confirmation, you can look to USOil and USDollar along with these levels. A break lower in USOil and higher in US dollar would likely accompany a break above the 1.3465 resistance.

From a risk:reward perspective, this trade is too close to major resistance to favor new long exposure and there is not enough credible evidence to engage in a short trade. For now, I will be flat on USDCAD awaiting a test for 1.3315. A break of those levels, along with the corresponding confirmation in USOil and US dollar would cause me to scale into a short trade around 1.3300 targeting 1.2950. If 1.2950 is hit, stops would be taken to breakeven as a larger reversal could be underway. If 1.3315 holds as support, a ‘buy the dip’ mentality should continue to serve you well as the trend isn’t ready to retire.