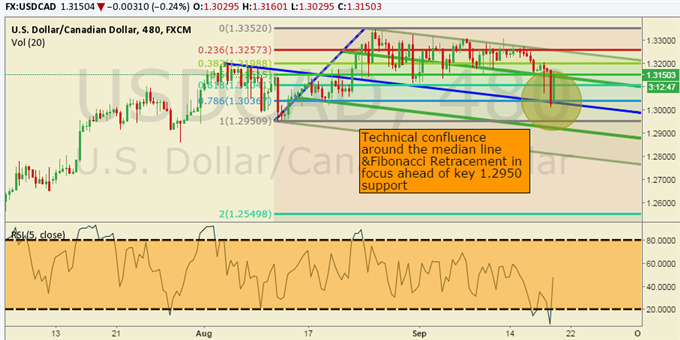 The Canadian Dollar remained within its falling corrective channel and saw the lowest levels since Mid-August this week. USDCAD continued its consolidation sideways after the USDOLLAR sold-off on the Federal Reserve’s dovish comments after holding rates near 0%. Momentum is hitting levels not seen since the turn higher in late June and longer-term technical studies like Ichimoku Cloud still expect support to hold on a longer-term basis. Friday saw a bullish reversal off median line support keeping the bull’s hopes alive for a resumption of the larger uptrend.

Those long USDCAD seemed to have unwound their position after a disappointing failure around the 34-mva. However, the hold of 1.2950 appears to be instilling confidence as Friday is closing on 2-day highs, a very bullish sign. Additionally, the post-FOMC sell-off did not see a break of the 1.3000 level, which has psychological importance. Lastly, the turn lower this morning around 1.3012 was off the 78.6% Fibonacci retracement level of the August price range that we have since traveled through.

This morning’s rebound has endorsed the larger call for a move higher however, more evidence is warranted after the near-300 pip drop from late last week. A daily close above 1.3200 with a stop at the recent low of 1.3012 targeting 1.3500 would be the preferred swing approach. This would align with a ~1:1.5 risk: reward and stay aligned with the larger trend after resistance had broken. The continued retreat in the correlated crude oil markets would further enforce the long set-up above 1.2950 on a weekly close basis.