DXY hit a level that has been in play since 1998

Last week, the US Dollar Index (DXY) traded down to a level that has acted as support and resistance since it first become a significant low in 1998. The area just around 92 has been in play as a meaningful turning point on five other occasions since then, most recently in 2017.

In confluence with this on and off again level is the trend-line from 2011. At first glance there isn’t anything particularly compelling about this trend-line given it has the bare minimum number of connecting points to make it a trend-line. However, when you create a parallel of the line you can run it from 2010 to 2019 and find it touching off on numerous swing points. The line is especially influential during the October 2017 to September 2019 period.

The long-term horizontal level and trend-line are in confluence right at last week’s low. The weekly reversal that formed off of this confluent level of support suggests there is buying interest that could lead to a larger advance than just a short-term corrective bounce.

On the daily chart there was what is now looking like a potential false breakdown on August 8, but for the DXY to really reverse course higher it will need to break above the top-side of the channel it has been stuck in since May. A break of the upper parallel and 94 could have momentum begin to pick up, with the March low at 94.65 up as the next challenge.

It is hard to say how a recovery bounce would play out, but probability has increased that one will develop here with confluent long-term support thus far holding. A weekly close below 92 will negate any neutral to bullish outlook and potentially have the DXY picking up more steam to the downside. 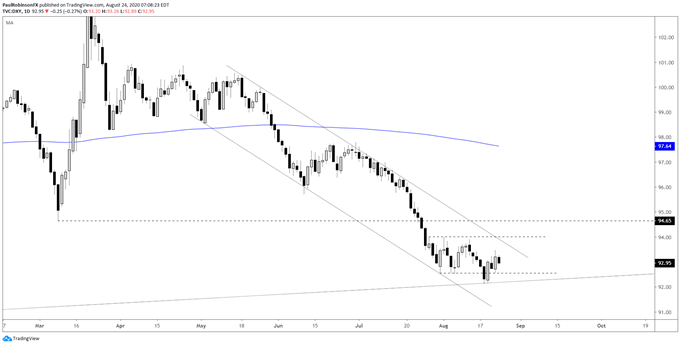