There is a popular adage that markets will do what they need to do to disappoint the most people at any one time. The recent USD outperformance has helped that adage ring true and most notably against commodity currencies like the Canadian Dollar and Australian Dollar as well as the EUR.

Traders are unsure what’s next for EUR/USD. The Bullish view is that the recent 275 pip pullback is nothing but a bump on a Bullish Journey to 1.2630, and potentially 1.2931. Such a move would align with an aggressive breakdown in DXY that would test and break the recently tried and held the support of 88.28 and 87.94.

An inability for this 1.2000 level to hold would open up the view of a broader breakdown on relatively significant USD-strength that could bring a test of the 38.2% retracement of the same range at 1.1708.

A Crowded Trade Gets an Unwelcome Test

Institutions are known as smart money, but they often get caught crowded into popular trades that are quick to reverse. One of those is the play of selling the US Dollar. Per Bank of America Merrill Lynch, the short US Dollar trade is the second most crowded trade second to bullish US equities and the most crowded FX trade.

The short-term outlook has seen focus turned to the concerns of the US fiscal expansion late into an economic cycle and the view that other major central banks normalization anticipation will drive up their currencies, and keep global capital flows as limiting USD upside.

A recent spike in the VIX on February 06 was unable to lift the US Dollar, which has caused some institutions to doubt a probable scenario that lifts the dollar. At the same time, a recent pull-back from record bullish exposure on EUR per the CME futures data suggests that it will take a lot for the institutions to throw in the towel on their bearish USD view. 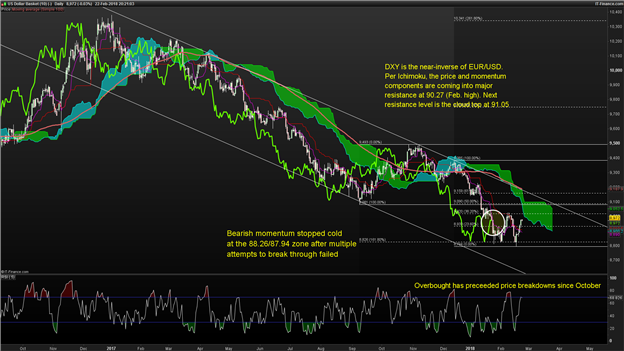 On February 16, the Dollar Index posted a Bullish Key Day. The pattern requisite is a price low that breaches the prior day’s low followed by a close above the prior day’s high. What’s more is that the Bullish key day aligned with a double-bottom against 88.45, the January low.

The bounce will look to the 38.2% Fibonacci retracement of the December-February range at 90.53 and the February 9 high at 90.56. As mentioned earlier, a break and close of February-high resistance could cause an aggressive unwind of the crowded short dollar position. The unwind could give surprising fuel to the upside up to the 50% retracement of the same price range at 91.23 followed by the 2018 opening range high that was traded at intraday on January 9 at 92.27.

A hold of 90.53/46 on a closing basis in light of the overall bearish momentum picture should encourage traders to heed the impulsively bearish momentum at present and continue to favor further DXY downside until resistance breaks.

Weekly DXY Chart Shows Channel Support Base May Have Formed 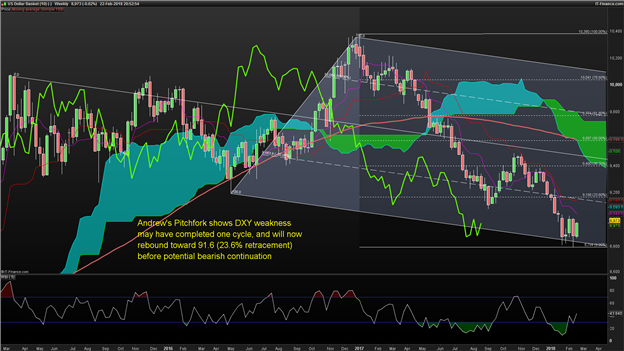 The next focal level will be a trendline drawn off the 2011 and 2014 lows that currently holds at 8,880. The current price of US Dollar Index is trading near this level, and a further breakdown and weekly close below this zone would further embolden the bears to keep selling pressure going.

The dollar’s struggles are not going away and flow into other economies argues that USD weakness will persist. While there were arguments for short-term USD strength, they continually failed to materialize showing that pressure remains and US Dollar Index weakness remains preferred.

Unlock our Q1 forecast to learn what will drive trends for the US Dollar through 2018! 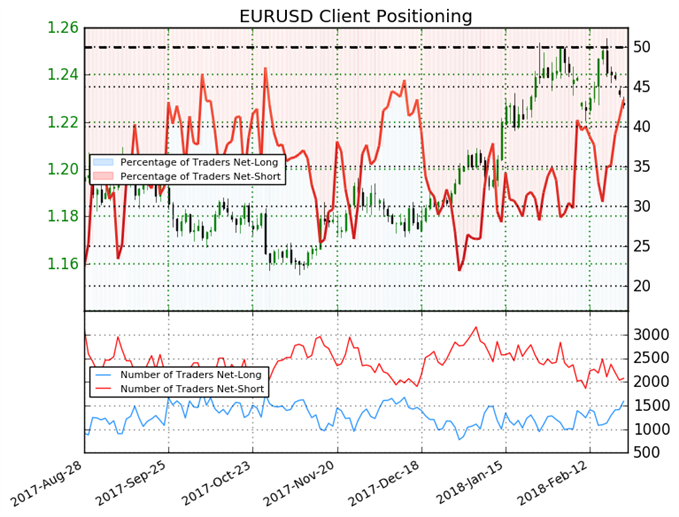