Given the horrible performance of the Dollar Index in 2017 relative to expectations going into the year, it’s fair to ask the following. Can the dollar index hold above 90, a level not traded at since 2014 as the ‘shock & awe’ of monetary policy normalization gets outsourced to other central banks.

A tailwind for the USD in 2014 has become a headwind in 2017 and possibly beyond. The initial boost was the emergence of widespread economic growth. The green shoots caused the Federal Reserve to hint at normalization that began with the rate hike of 2015 and the simple forecasting of normalizing caused the USD to gain ~20% in July 2014 through January 2017. However, the growth has spread (as central bankers hoped it would), and now the central banks that are hinting at possible normalization are the ECB and BoJ, which in turn, may see their respective currencies see the same type of outperformance in 2018 that the DXY did in 2014-Jan 2017. The ECB has already seen the EUR (57.6% of the Dollar Index Weighting) rise 10.6% this year and further gains would likely weigh down on the Dollar Index, which has fallen by 9.5% YTD.

The charts can be a helpful guide, but the fundamental backdrop suggests that global growth is helping other currencies much more than the US Dollar despite a hawkish Federal Reserve, which has already been priced into the market. Another argument for the lack of US Dollar upside is seen in the flattening US yield curve between the US Treasury 2 and ten-year security. The flattening yields show a tightening Federal Reserve on the front end as investors are unwilling to sell off the longer-dateddebt for fear that growth and inflation measures will soon fade.

When looking at the chart below, the key zone worth watching is the 200-DMA on the four-hour chart (93.95 and a level that had our previous attention, 94.20. A daily price break and close above that level would indicate short-term strength if nothing else as it would break the series of lowerlows and lower highs were seen since October. A break above this zone would likely be triggered by JPY weakness as risk-sentiment remains positive and the GBP outlook remains uncertain with unfolding Brexit negotiations with a current focus around the Irish border to be discussed on December 14.

The counter view would be a break below the November low near 92.50. A break and close below would likely set the stage for a negative start to 2018, and what could altogether be another poor year if the yield curve continues to flatten and global growth that the Fed has already recognized and implemented into monetary policy plans forces other Central Banks to pull away from their QE regimes.

Unlock our Q4 forecast to learn what will drive trends for the US Dollar through year-end! 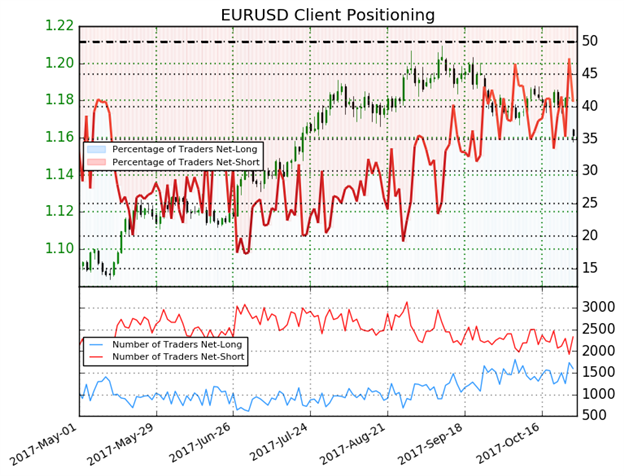