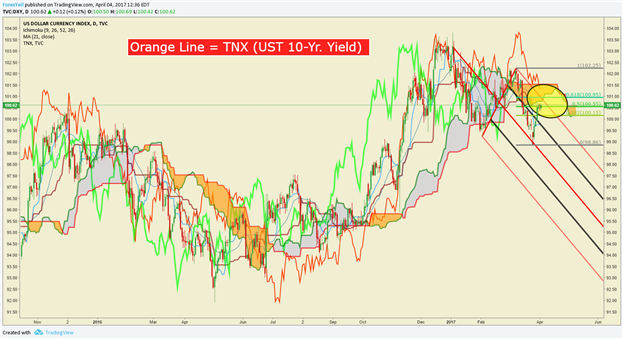 Near-term resistance is a confluence of different indicators clustered around 101. The technical resistance points are comprised of the 61.8% retracement mentioned above, the Ichimoku Cloud on the daily chart, and the negative sloping Andrew’s Pitchfork drawn off the high close in early January. I will hold a bearish bias, and prefer USD strength only against weak FX absent a daily close above 101.95. For confirmation, I will also look UST 10-Yr yields, which hold a positive 20-day correlation of +0.45and UST 2-Yr yields with a similarly positive correlation of +0.525. The chart below has an overlay of the TNX (10-year yield), and you can see that if the relationship holds, it is difficult to see USD breaking higher without TNX doing so as well.

If the current move does prove to be a pull back in a downtrend, I will anticipate further JPY strength and eventual EUR strength while also watching GBP, which is trading at resistance. The EUR has been offered rather aggressively on a dual component of ECB talking down priced in rate hikes after the March ECB meeting as well as hedging activities to French Election risk.

The protection sought that has brought EUR down, and subsequently DXY higher, can be seen in the 1-month 25D Risk Reversal or Riskies, which show out of the money puts are trading at 130bp premium to calls. A Macron victory would be expected to halt the downside protection purchasing, which could lift EUR and drop DXY back toward the March 27 low or possibly to new 2017 lows.