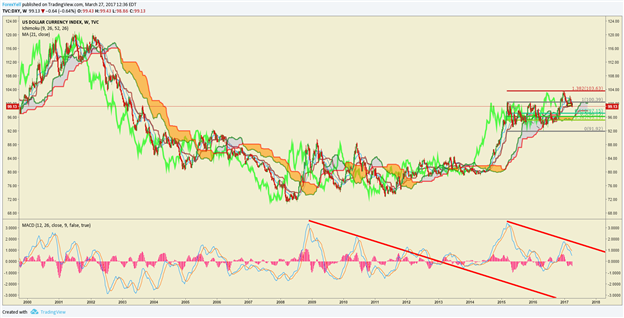 The ICE Dollar Index, which measures the dollar against a basket of six major currencies, slid to its lowest level since November this week on news that the Trump administration's health care bill was pulled before the House voted on it. The situation has prompted doubts on the administration's ability to steer further legislative changes that would induce inflation and may mean the Fed will not be pushed into further unplanned interest rate hikes.

Technical View: DXY broke below the Feb low of 99.23 to a 98.86 this week. New yearly lows tend to not be buying opportunity for trend traders. The rebound we’ve seen later in the week is not too surprising as mid-week, USD/JPY and EUR/USD were the currency pairs in the G10 + Crosses where spot was furthest away from the 20-DMA. Therefore, a pull-back to the mean is anticipated. However, the next move will be telling, further weakness, which has fundamental backing, would likely mean we’re moving into a 2016 pattern of DXY weakness in the coming months.

To guide my opinion on DXY, I watch the heavily weighted EUR (57.6% of DXY basket), which is rising and could continue to rise given the US/German 10-Yr yield spread is near the narrowest level in 3-months. Over this week, we’ve seen EUR strength and a further narrowing in US/German spreads favoring EUR strength despite the recent pullback.

The chart below shows LT Bearish MACD Divergence. Be on the watch for a further breakdown, which divergence favors, but does not guarantee.

For traders looking for life in the greenback, resistance comes in at 101.01, the March 13 low and the recent range 61.8% retracement. A break above 101.01 would show an overlap from a previous downtrend that could mean a break higher is developing and should be co-joined with EUR weakness. However, a failure for the price to surpass 101.01 could mean upside remains limited, and the price is merely consolidating before another fall instead of reversing higher. In this scenario, further downside is favored.

H4 DXY Chart With A Lot Of Resistance Overhead 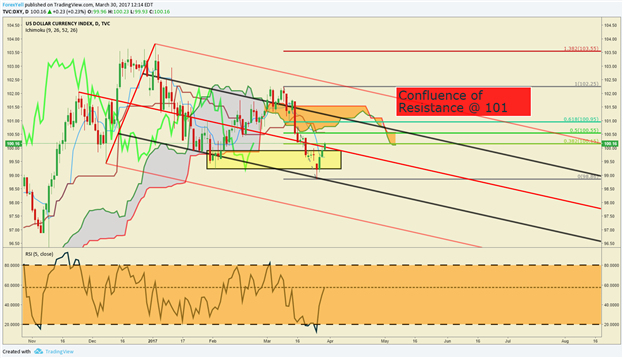